Badin to put ‘dead man’ back in roadway 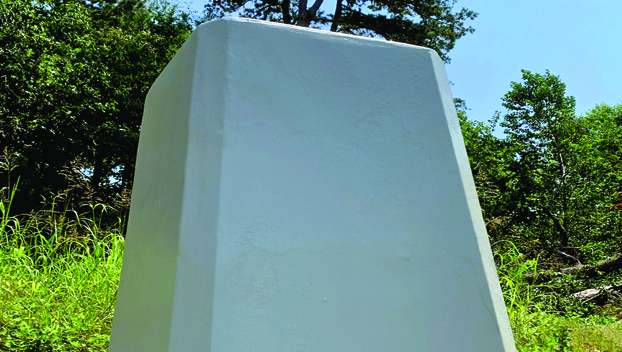 The “dead man” in Badin has a new look.

After much ado, Badin will soon place a “dead man” in its new median.

Badin Town Council voted 4-1 during its regularly scheduled July meeting to return a refurbished concrete traffic bollard, known locally to some as the “dead man,” to its familiar station in the median of Falls Road at N.C. Highway 740

Mayor Anne Harwood and Mayor Pro Tempore Deloris Chambers, along with councilmen Ernest Peoples and Gary Lowder, voted for Lowder’s motion to place the small obelisk in a new roadway median, but out of harm’s way. Councilman Larry Milano cast the lone no vote, preferring to relocate the post for public display out of the roadway.

The device was first placed in the road about 80 years ago to divide traveling lanes on Falls Road, encouraging motorists to keep right and avoid cornering into the left lane. It served as an obstacle and instructional traffic device for years, occasionally donning official paint.

A frequent target for trailers of large trucks turning on and off the highway, the bollard endured collisions and gained lore through the years, sustaining permanent damage along the way. It also gained a lane divider median, relegating it to nostalgic duty. 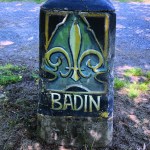 That sense of “dead man” nostalgia was shared in board meetings prior to town council’s vote last week. One meeting, shortly after its initial move, drew former Badin residents to town for comment, while Badin Historic Museum’s co-president, Dale Ward, commented in subsequent visits that it is, “part of the town’s history.”

The concrete barrier nearly met its demise at least twice in the past decade or so — once when it was deemed obsolete by highway maintenance crews after a tractor trailer collision lifted it out of the ground, leaving it cracked and tilted at a 45-degree angle. Local intervention by town staff saw it vertically righted and replaced rather than hauled off.

“We’re lucky to have been able to save it twice already,” Badin Town Manager Jay Almond said, “once when the department of transportation was preparing to remove it, but agreed after some discussion to leave it. Then again when median demolition was underway and the crew agreed to move it to safety on town property rather than crush it. Both instances were close calls.”

The beautification project, a planter median at the town’s Central Business District gateway, involved local and state cooperation. The town funded state required engineering, asphalt median demolition and removal, installation of a new concrete curb-and-gutter style median with earthen center, as well as purchase and installation of flowers and shrubs.

“This project was one of our goals as a council, part of our work to continue to revitalize and beautify our community,” Harwood said.

Bollard removal during the gateway project gave town officials the opportunity to, by unanimous vote, repair damage and prepare it for display.

Weather delays ultimately led to town council’s decision to allow restoration contractor Jerry Beeson to house the bollard in a secure, dry environment to allow Beeson to undertake the work in a controlled setting.

That approach was successful and the bollard was delivered to the town after a chemical wash, top section replacement, body chip and crack patching, and protective layers of mortar restoration compound.