Early Wednesday morning Albemarle Police Sgt. J.D. Laws was sitting in his patrol vehicle in front of the police department when he heard gunshots nearby.

Laws responded to the area of First Baptist Church, 201 N. Second St., where he heard the gunshots. He observed a male placing a rifle in the trunk of a 2005 BMW.

Laws attempted to stop the vehicle when the vehicle fled. Officers pursued the suspect vehicle towards Badin when the car came to a stop on Airport Road. 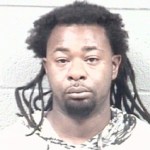 The driver, James E. Kindell, 34, was arrested on the scene.

Kindell was charged with felony flee to elude arrest, felony assault on a law enforcement officer with a firearm, misdemeanor discharging a firearm inside the city limits, speeding 119 in a 35 mph zone, stoplight violation, illegal passing, reckless driving to endanger and failure to drive on the right side of the highway.

Kindell was transported to the Stanly County Jail and received a $40,000 secured bond for his release. Kindell’s first scheduled court appearance is 9 a.m. Aug. 3.