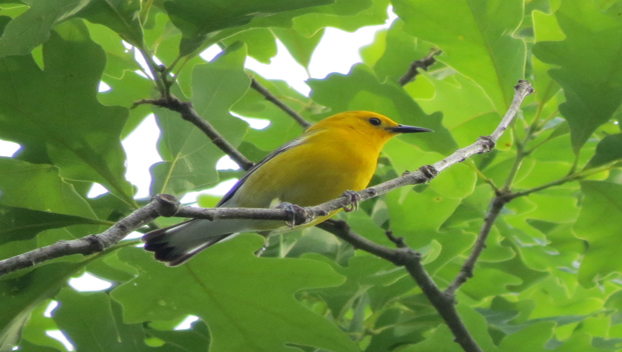 The Carolina Bird Club provided this image of a warbler.

Land Trust receives funds for Save the Yadkin

Three Rivers Land Trust will receive $5,000 to assist in the acquisition of the Save the Yadkin Phase II project along the Yadkin River.

Alcoa owns the land along the eastern shore of the Tuckertown Reservoir which is subject to the Yadkin River relicensing settlement agreement (RSA). The NC Wildlife Resources Commission and Three Rivers Land Trust have until September 2021 to raise $8.5 million needed to purchase these lands or Alcoa can sell them to the highest bidder.

“Three Rivers Land Trust is thrilled to have been awarded funds from the Carolina Bird Club to go towards the Alcoa Tuckertown Lands Acquisition,” said Crystal Cockman, Three Rivers Land Trust’s director of conservation. “This is a community-focused project, and every contribution is critical to the overall goal of raising the funds to acquire these important properties. We appreciate the Carolina Bird Club’s recognition of the significance of this project to bird conservation in North Carolina.”

All of this land will be held by the North Carolina Wildlife Resources Commission and will
continue to remain open to the public as game lands in perpetuity. Generations of North
Carolinians have enjoyed access to these lands for a variety of recreational activities including camping, hiking, rock climbing, paddling, hunting and fishing.

More than 1.7 million people use the waters of the Yadkin-Pee Dee River Basin every day, for
drinking water, for industry, for growing crops, for generating power and for recreation. Twenty-five public utilities draw water from the river. Approximately 8.6 million people live within 100 miles of the center of proposal acquisition including the metro areas of Charlotte, Winston-Salem and Greensboro.

The Carolina Bird Club is a nonprofit organization which represents and supports the birding community in the Carolinas through its official website, publications, meetings, workshops, trips and partnerships, whose mission is: to promote the observation, enjoyment, and study of birds, to provide opportunities for birders to become acquainted, and to share information and experience, to maintain well-documented records of birds in the Carolinas., to support the protection and conservation of birds and their habitats and foster an appreciation and respect of natural resources, to promote educational opportunities in bird and nature study, and to support research on birds of the Carolinas and their habitats. Membership is open to those interested in the study and conservation of wildlife, particularly birds. Visit https://www.carolinabirdclub.org/.

To learn more about the Save the Yadkin Phase II project, or how to support Three Rivers Land Trust in its conservation mission, contact Crystal Cockman at 704-647-0302 or crystal@threeriverslandtrust.org.