Traffic stop leads to arrest of individual wanted for shooting

On Monday, officers of the Albemarle Police Department conducted a traffic stop on a vehicle for a traffic violation. 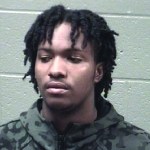 During an investigation into the occupants of the vehicle, officers noticed Makari Ridenhour, 19, who was wanted for a previous incident involving shooting into an occupied dwelling, was in the passenger area of the vehicle. Officers arrested Ridenhour for his outstanding warrants.

Upon further investigation, trafficking amounts of fentanyl and marijuana were found.

Ridenhour was transported to the Stanly County Jail and received a $250,000 secured bond for his release.

His first scheduled court appearance is Aug. 24 at 9 a.m.