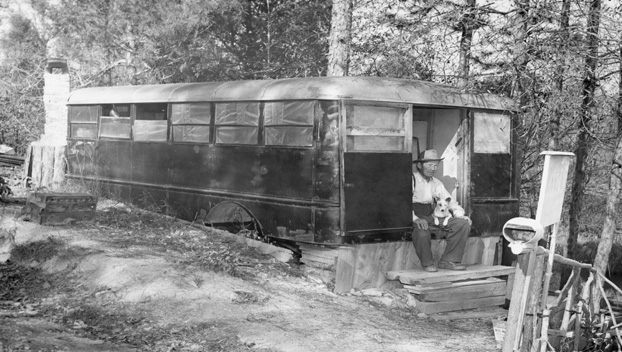 C.C. Russell turned this retired school bus into a home.

PEEKING INTO THE PAST: C.C. Russell and his bus home

Charles Columbus Russell was born and grew up in the Norwood area.

He married Mattie Sue Walker in 1902, and they originally spent time in Greensboro.

According to a 1951 SNAP article by Fred T. Morgan, they spent most of their lives in Stanly County working in a cotton mill.

In 1950, a number of years after his wife had passed away, Russell decided to purchase a retired school bus to make it his new home.

Morgan’s article explained there was a stream nearby for fishing and a spring for water. Russell heated the bus with a small wood stove, and there was a kerosene lamp for reading at night. The one thing he wanted to add was electricity if he could convince the power company to run a line to the bus.

It is unclear how long Russell lived in his unique home.

Several years later he moved in with family in Charlotte, and he passed away Jan. 23, 1957.

At Tuesday’s meeting of the Badin Town Council, the council reviewed but tabled approval of a new ordinance regarding food... read more