After a decade on the force, Shew becomes Locust’s newest police chief 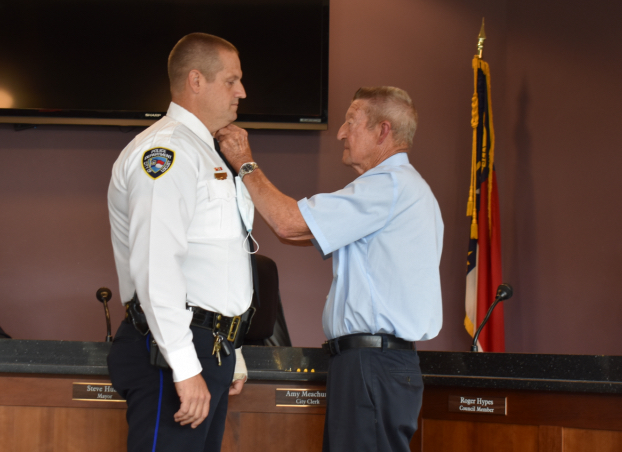 After roughly a decade working in the Locust Police Department, Jeffrey Shew achieved his “ultimate career goal” Monday morning when he was sworn in as the city’s newest chief.

But the circumstances of his ascendancy from assistant chief to the top spot was far from ideal. As excited as he is, he’s equally sad to be replacing his long-time friend Steven “Smitty” Smith, who was chief for several months before he unexpectedly died in July.

“It’s definitely been a conflict of emotions,” said Shew, 42,  speaking in terms of separating his joy for his new position with his continuing grief over Smith’s passing.

Shew had known Smith since 2008, when he first joined the force as a reserve officer originally from Brunswick County. During his time with the department, Shew also served as a patrol officer and detective sergeant, before Smith appointed him as his assistant chief the day he got the top job last year. The Locust Police Department has been the only department he’s ever worked in and every step of his journey, Smith had always been with him.

In the short amount of time that Smith was chief, Shew said he learned from his friend the value of taking care of the patrol officers — since both Smith and Shew were originally in the same position. He also appreciated that Smith was able to strike the right balance of being the leader of the department while also being a friend to those who worked underneath him.

He also said his former chief was a great storyteller who was personable and could make anyone laugh.

“I keep saying he missed his calling as a standup comedian because the way he would tell stories was just classic,” he said.

While Locust is still mourning Smith’s death, city leaders are confident that Shew is the right man to lead the department.

“Chief Shew brings leadership to LPD at a time when it’s needed the most,” said City Administrator Cesar Correa. “His ability to lead the department through the tragedy of Chief Smith’s passing is a testament of the value he brings to the organization.”

Correa added: “He is respected by City Council, City Administration, LPD officers, and his peers alike. His attention to detail, work ethic, and administrative skills will ensure the department needs are met for years to come.”

As he takes over the reins as chief, Shew knows he will operate differently than Smith, but he’s okay with that. His main focus is ensuring his fellow officers in the patrol division “are as supported as I can possibly support them” and that “I can give them everything that they need to do their jobs.”

He plans to continue working to make sure the department remains as successful as it was under Smith and the other chiefs of the past.

“As that old saying goes,” he added, “when it’s not broken you don’t try and fix it.”