Taylor continues on NASFM board 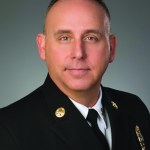 Brian Taylor of Albemarle is the N.C. state fire marshal.

“I truly appreciate the support and confidence of my colleagues in electing me to serve them for a second term as president,” said Halas. “Working together with the exceptional Board and dedicated staff, I’m certain we will continue to effectively champion fire and life safety throughout the nation.”

The NASFM membership also elected as its vice president Michael Desrochers, executive director of the Vermont Division of Fire Safety, and Butch Browning, Louisiana State Fire Marshal, to serve as secretary/treasurer. Desrochers has served on the Board of Directors since 2016. Browning has served on the Board since 2010, including serving as president from 2014-2018.

“As former Wyoming State Fire Marshal and NASFM Board member, I am excited for the association’s prospects as we work through these challenging times,” said NASFM Executive Director Jim Narva. “The membership has selected strong leaders with vision and energy. I look forward to working alongside them as NASFM continues our leadership in advocating for fire prevention and life safety.”