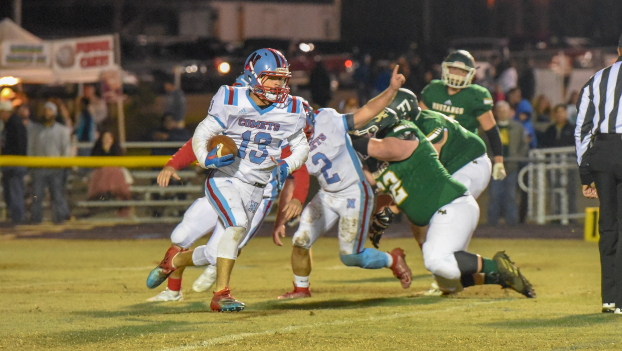 North Stanly's Cooper Hogan (No. 13) will be playing in the 2021 Blue-Grey All-American Bowl in Dallas, Texas. (Photo by Charles Curcio/staff)

This week, the North Stanly Booster Club account on Twitter announced Cooper Hogan, a senior wide receiver and defensive back for the Comets, will be playing in the 2021 Blue-Grey All American Bowl at AT&T Stadium in Dallas, home of the Cowboys of the NFL. Hogan will play free safety at the all-star event.

Hogan played in all 13 games last season for the Comets and finished second on the team with 24 receptions. Defensively, he was third for North with 70 tackles and led the team with four interceptions.

The opportunity to play in the game, Hogan said, came from participating in a super combine event at the Washington NFL practice facilities in Richmond, Va.

He said he was “super excited” about the opportunity, adding there were a number of talented athletes at the combine.

After going through skill sets including bench press, broad jump, the 40-yard dash and the shuttle run, of which Hogan said there was a lot of competition, he was selected for the game.

Hogan said he would love to play college football and has talked to programs including Appalachian State, Lenoir-Rhyne and Western Carolina, along with some Div. III programs like Methodist and Brevard.

“We will see what plays out,” Hogan said, adding he wants to study in the medical field after high school.

It has been different, he said, not having been able to play sports for six months when he had been playing football, basketball and baseball since he was a child.

“It’s time to play some games,” Hogan said, adding he and his teammates have high expectations for the football season in February.