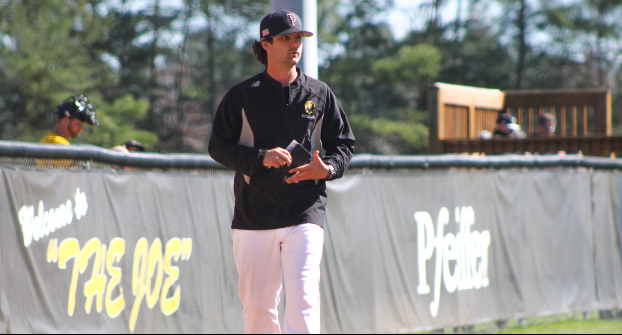 Craig Bolton, a Pfeiffer University alumnus, former student-athlete and member of the baseball coaching staff since 2015, has been promoted to head baseball coach, the University has announced.

Following his graduation from Pfeiffer, Bolton continued as a volunteer assistant and helped with the pitching staff under former head coach and current Duke University assistant coach Dusty Blake. In his first year on staff in 2016 as a volunteer, the Falcons made an appearance in the Conference Carolinas Championship game and a semifinal appearance in 2017. Bolton was then promoted to pitching coach in the spring of 2018.

In 2019, the Falcons won the 2019 ECAC Championship and under Bolton’s guidance the Pfeiffer pitching staff finished the season with the second-lowest ERA in the USA South. That season, Bolton mentored Nick Richmond, who signed with the Detroit Tigers organization and played professionally in the Florida State League. Richmond also earned ECAC MVP prior to inking his free agent contract.

Also involved with local baseball away from Pfeiffer, Bolton served as pitching coach for the Forest City Owls of the Coastal Plain League during the summers of 2017 and 2018. The Owls were successful in Bolton’s time on their staff, as they claimed first and second half Western Division championships in 2017 and also won the second half Western Division title in 2018. Overall, the Owls led the CPL in team ERA in 2017.

“I have been fortunate to learn under (former head coaches) Dusty Blake and Jordan Stampler in my time here at Pfeiffer,” said Bolton. “I can never thank those guys enough for the opportunities that they offered me while being able to grow as a person and a coach. They brought so much passion and knowledge to our program and always put our student-athletes first and I look forward to building upon that.”

In his playing days at Pfeiffer, Bolton earned second team All-Conference Carolinas honors as a relief pitcher in 2012 when his career was cut short due to injury. He was still productive in throwing 21.1 innings with a 2.11 ERA while earning six saves. He then spent his remaining years as a student assistant until his graduation in 2015.

“I am extremely grateful for this opportunity and want to thank Director of Athletics Danielle Lafferty and President Scott Bullard in trusting me to lead the baseball program here at Pfeiffer,” he said. “There is such a deep history within this program and I have been fortunate enough to be a part of it as a player and as a coach. To be the next head coach is truly an honor and I look forward in continuing the success of the Pfeiffer Baseball program both on and off the field.”

“I am excited to announce the promotion of Craig Bolton as head coach of the baseball program,” added Pfeiffer’s Director of Athletics Danielle Lafferty. “Craig has served under great leadership over the years that have allowed him to flourish and have helped him develop what he needs to be successful. As an alumnus of the program and someone who has worked their way from volunteer assistant to being a full-time assistant within the program, we believe Craig is the best fit to lead our baseball program. He understands the culture we have established and the plans we have for the future.”

Bolton earned his undergraduate degree in communications from Pfeiffer in 2015 and earned his master’s degree in leadership in 2018.