Sellers creates photographs that speak to Locust’s past

The nonstop hustle and bustle of everyday life can often overwhelm people, especially with society’s ever-increasing dependence on technology. Sometimes it’s only natural for people to wistfully look back to the past, to a time when life seemed simpler and less hectic.

Stanfield resident Lindy Sellers undertook a recent project to recapture a sense of the past. Combining her love for vintage dresses (which spans from around the 1930s to the 1960s) and photography, she took several pictures of notable Locust area residents depicting life in bygone eras. The 12 pictures, which were taken last year, ultimately became a calendar to celebrate Locust’s 150th anniversary. 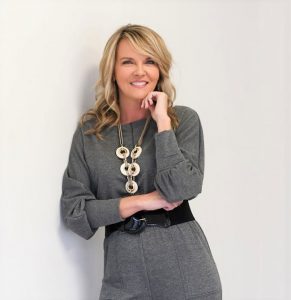 Lindy Sellers of Stanfield created 12 black-and-white photographs of Locust citizens detailing life in the past. (Picture provided by Lindy Sellers)

The pictures were a brief reconstruction of what life was probably like during various moments in the city’s past.

“It seemed like someone just stepped back in time in Locust and just took a time machine and for just a moment they glimpsed into somebody’s life of what it was like in the 1800s, 1930s, 1950s…” Sellers said.

Once she had the idea, Sellers called many of her Locust friends and explained to them her project to see if they would be interested in acting as models in the pictures.

“Most everyone said yes,” she said. “It was beautiful.”

Locust Planning Director Scott Efird, who was featured in one of the pictures along with his wife Tracy, said it was “an honor” that Sellers reached out to him.

“The older you get, history means a lot more than it used to growing up,” he said.

The calendars were sold during Locust’s 150th anniversary celebration weekend in September. The 12 pictures were also framed and recently featured in the Stanly County Agri-Civic Center; the pictures are now inside Locust City Hall, which will be their permanent home.

“I hope that when you gaze upon the images, you are transported back in time, if only for a moment,” Sellers said.

Lindy Sellers provided The Stanly News & Press with the names of the people in each picture along with some interesting historical information about many of the pictures, based on research she did about Locust and the country as a whole. 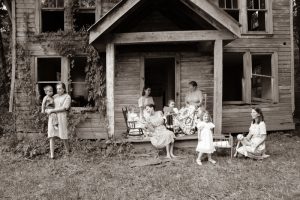 “Judy Talley is one of the most creative people I know and she was the first person I called with my idea” about creating a Locust calendar, Sellers said. “When she said that she loved the idea and would model for me, I knew it would be a wonderful photo.” 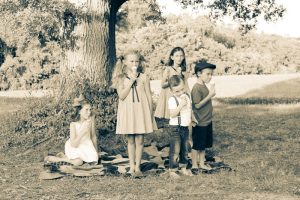 According to the Farmers Almanac, grocery stores didn’t start selling ice cream until the 1930s, and by World War II, ice cream had become so popular that it turned into somewhat of an American symbol similar to apple pie. Ice cream was great for troop morale, Sellers said, and the U.S. Navy spent $1 million in 1945 converting a concrete barge into a floating ice-cream factory to be towed around the Pacific, distributing ice cream to ships incapable of making their own, according to a 2017 Atlantic article.

“This photo was taken near our old 1915 farmhouse,” Sellers said. “Originally, I wanted to use a hand cranked ice cream maker as part of the picture, but we could not find one. These children are all sweethearts and are dear to my heart.” 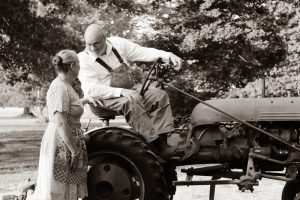 Tracy and Scott Efird. Scott is riding his great-grandfather’s 1948 Cub tractor on his family’s land in Locust. (Picture provided by Lindy Sellers)

Farming has been a big part of Locust’s landscape over the years. In the early 1940s, tobacco and cotton were the main cash crops, Sellers said. Farm families also planted smaller gardens filled with corn, beans, potatoes and tomatoes. The farmer’s wife worked alongside her husband, harvesting and storing up the bounty for the winter. Teamwork, persistence, love for the land and each other helped make that tough job a little easier.
“Scott suggested we use his great-granddaddy’s old tractor and I think it turned out great,” Sellers said. 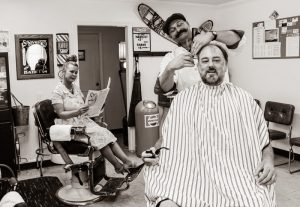 Alisha and Randy Drye, along with the barber, Steve Grissom, at Set Apart Barber Shop in Stanfield. (Picture provided by Lindy Sellers)

Barbering, as a profession, has been a part of America since the country’s founding, according to the American Barbering Association. In the early 19th century, Sellers said, barbers not only practiced hair styling but also were expected to provide medical and dental assistance, especially in towns where medical professionals were easily accessible.
“Randy and Alisha are a wonderful couple,” Sellers said. “They quickly said yes to my idea and even bought vintage clothing from Ebay to set the scene. I love it when people ‘get it’ when I try to explain things to them.” 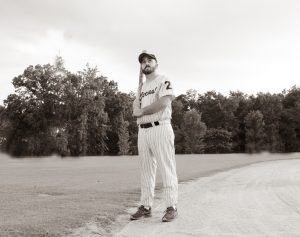 Baseball has been part of American culture since around the time the country was first founded at the end of the 18th century — the earliest mention of baseball in the country was 1791 ordinance in Pittsfield, Mass. banning the playing of the sport within 80 yards of the town meeting house. The sport has been enjoyed by the citizens of Locust for a long time.

“Ernie is a great guy,” Sellers said. “It was so cool that he got to wear his daddy’s old baseball uniform. The uniform was loaned to us by the Locust Historical Society.” 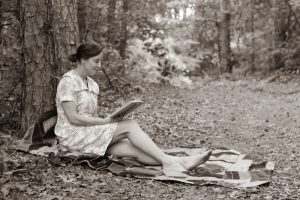 Heather Rushing Chaney reads a book beside a tree on Lindy Sellers’ property in Stanfield. (Picture provided by Lindy Sellers)

Heather Rushing Chaney’s dress for her photo was made in 1940 and Sellers said the books that were published that year include “For Whom the Bell Tolls” by Ernest Hemingway, “The Long Winter” by Laura Ingalls Wilder and “Horton Hatches the Egg” by Dr. Seuss.

“Heather is a local yoga instructor and was so excited to wear this vintage dress,” Sellers said. “In fact, she said that she loved it so much, she wore it to an event that her son had at school, after the photo shoot.” 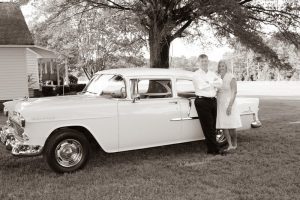 Rudi and Debbie Heath alongside a 1955 Chevrolet that belongs to Scott Efird. 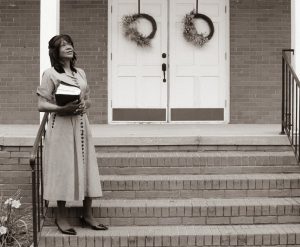 Churches are an important aspect of Stanly County, especially Locust. Churches of many denominations can be found in the area. One of the oldest churches is Brown Hill A.M.E. Zion Church, which was founded in 1874.
“Miss Iris was recommended to me by Gary Tucker,” Sellers said. “She proved to be a fantastic model as she showed up wearing a vintage dress that was made in the 1940s.” 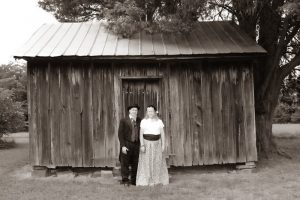 Kendra and Gary Tucker in front of an old homestead that used to belong to Kendra’s family. (Picture provided by Lindy Sellers)

When families first settled in Locust, Sellers said, the first order of business was to build a shelter. They then cleared the land for crops and animals and built fences. Improvements or additions to the homes came later.

“This old homestead belonged to Kendra’s family many years ago,” Sellers said. “Kendra bought her late 1800s costume and Gary already had his in his closet. They were excited about the project and recommended Iris Hamilton and Ernie Linker to me when I needed two more images.” 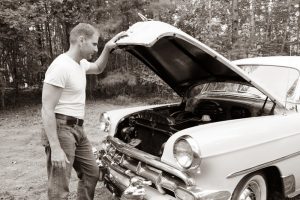 Dr. Patrick Ess with a Chevrolet, likely made in the 1950s. (Picture provided by Lindy Sellers)

In 1950, there were 40 million cars on the road, according to information from the Federal Highway Administration.

Taking care of the cars were a priority for people back in the day, Sellers said, and many spent their Saturday mornings performing auto maintenance.

“Dr. Patrick was a great sport and looked the perfect part for this photo,” Sellers said. “The car belongs to Gary Tucker and the image was made in the Tuckers backyard.” 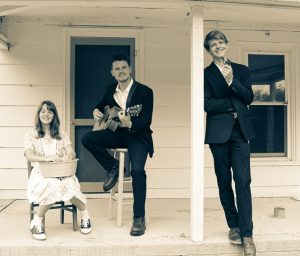 Lainey, Nate and Wesley Sellers on the front porch of the family’s 1915 farmhouse. (Picture provided by Lindy Sellers)

Families often listened to the radio or played their instruments for entertainment during the early 1940s, Sellers said.
The radio station WBT was broadcast out of Charlotte and could be heard clearly out in Western Stanly County, especially at night. Songs from the Carter Family, Arthur “Guitar Boogie” Smith and The Briarhoppers were popular and most likely influenced many young people to learn to sing and play the guitar.

“My children are used to dressing up and having their photo taken,” Sellers said. “I wanted this image to be what a Sunday afternoon might look like in the 1940s with a daughter breaking beans for supper and the boys on the porch singing and laughing.” 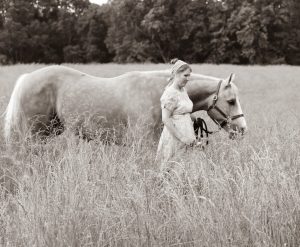 Velvet Linker with one of her horses on her farm in Locust. (Picture provided by Lindy Sellers)

Horses were an important part of farming in the early days of Locust. With the invention of tractors, the horse’s job of plowing was replaced by machine. But, according to some small family farmers, the speed advantage of a tractor over a plow horse didn’t make that much of a difference, Sellers said. Plowing with a horse kept the soil in better shape. Also, the horse grazed and ate feed the farmer grew. The horse’s manure made good fertilizer, too.

“Velvet was another good sport,” Sellers said. “She was excited to wear the vintage dress and get some good photos taken with her horse.”