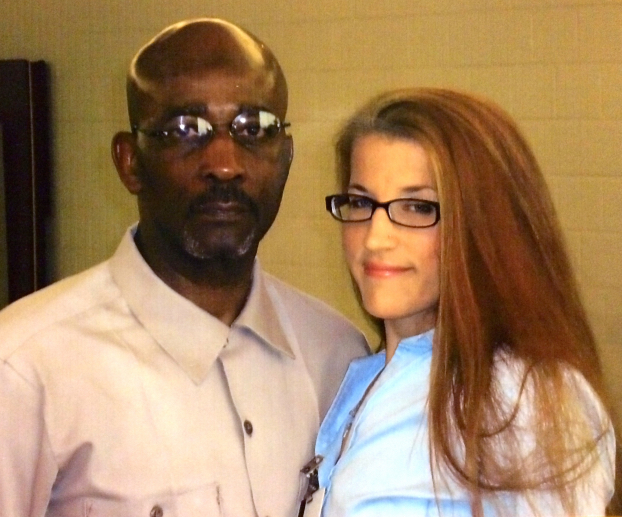 Ronnie Long with his wife Ashleigh. He was convicted of rape in 1976 in Concord. He now resides at Albemarle Correctional Institution. Long’s conviction has stood for 44 years despite growing evidence that police and state investigators withheld evidence. Photo courtesy of Ashleigh Long.

Ronnie Long, the Concord native who has been in prison for 44 years for a rape he adamantly says he didn’t commit, will be freed, according to his lawyer.

Jamie Lau, who is part of Duke University’s Wrongful Convictions Clinic and has worked with Long since 2015, wrote on Twitter Wednesday that the state will ask the district court to enter a writ vacating Long’s conviction.

“In short, Ronnie Long is coming home!” he wrote.

No official date has been set for Long’s release.

He has spent the past two and a half years inside Albemarle Correctional Institution and has feared for his life due to the coronavirus pandemic — especially since he has underlying health conditions such as hypertension, high cholesterol and diabetes. ACI has 188 inmates who have tested positive for the virus, making it one of the largest outbreaks among prisons in the state. At least 36 staff members have also tested positive.

Long, 64, has maintained his innocence over the years with a growing body of forensic evidence — including 43 fingerprints taken from the scene that didn’t match Long’s — that has only bolstered his case. Long, who is Black, was tried in 1976 by an all-white jury with the only evidence against him being the testimony of the survivor.

The forensic testing results “were concealed from him as well as from the prosecutors and those results were favorable and pointed away from him as the person who committed the crime and towards someone else,” Lau said in an interview with The Stanly News & Press last month. The new evidence also revealed officers with the Concord Police Department who spoke at the trial had testified falsely when it came to forensic evidence.

“While it will take some time for the courts to do what is needed to vacate the conviction, the State has set in motion a process that will lead to Ronnie’s freedom,” Lau wrote. “I spoke w/ Ronnie this morning. He is grateful, overwhelmed, and looks forward to reuniting with his loved ones.”

On Monday, the United States Court of Appeals for the Fourth Circuit, which heard Long’s case in early May, ruled 9 to 6 to remand his case back to district court for further proceedings.

Writing for the majority of judges who approved the new hearing, Judge Stephanie Thacker addressed the fact that police officers hid evidence from Long “despite knowing that doing so could lead directly to Mr. Long’s death.” She wrote that “such an action is repugnant in any context. But it takes on a particularly sinister meaning here, given our country’s historical treatment of Black men accused of raping white women.”

His case has attracted state and national attention over the years. A letter was recently sent to Gov. Roy Cooper from 16 state representatives from across North Carolina urging him to commute Long’s sentence.

His wife Ashleigh Long told the SNAP that “we are extremely pleased that the State of NC is finally doing what is right and just for Ronnie Long.”

“Ronnie is going to be able to celebrate his 65th birthday as a free man,” Ashleigh Long added.