The weight room in Merner Gymnasium at Pfeiffer University has been named “The Snake Pit” in memory of Lester “Snake” Roberts, who served as the head of security on Pfeiffer’s Misenheimer campus for 27 years until 1994. Signage will be installed in the coming weeks to commemorate the new name, which honors one of Pfeiffer’s most devoted sport enthusiasts.

Roberts died July 31 at age 92. When he retired from Pfeiffer, the Lester F. “Snake” Roberts Endowed Scholarship was established in his honor. Thanks in part to recent gifts honoring the impact Roberts had on generations of alumni and community members, the scholarship fund is nearing the halfway mark toward a funding goal of $25,000. Contributions in honor and memory of Roberts are still being accepted for the scholarship. The fund will support students from Stanly County who are majoring in criminal justice. 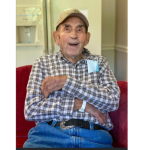 Roberts “was a respected officer of the law, enriching the lives of students, colleagues and friends with his sense of humor and humble character,” said Dr. Scott Bullard, Pfeiffer’s president. “On a personal note, I am sorry that I won’t be able to watch more Pfeiffer basketball games with my friend, who attended Pfeiffer athletic events with remarkable, and perhaps unrivaled, consistency. Snake’s knowledge of Pfeiffer’s history and passion for Pfeiffer athletics and Pfeiffer students had few peers, and he made for a great friend in the bleachers.

“And on a professional level, I know that I speak for hundreds of alumni when I say Snake made a true difference in my life and on this campus. He certainly ‘did his job’ each and every day — going above and beyond any job description to do whatever was needed to ensure student safety and a quality student experience.  And in many ways he was one of those storybook employees who are nearly as involved in the life of the university in retirement as they are during their legendary careers. He was a fixture here, and he will be sorely missed. Many students have a ‘snake’ story about the man who made a memorable impact on their lives.”

One such story emerged in a 2015 profile of Roberts that Josie Harper wrote for The Stanly News & Press. One evening, a water fight broke out on the third floor of a dorm on campus. Roberts rushed to the scene and, as he was climbing stairs to get to the ruckus, was drenched with a bucket of water. He calmly said that he would go home, take a shower and change his uniform. When he returned, the dorm hall had been mopped up, and everyone had retired to their rooms.

An uncle of Roberts gave him his nickname “Snake” because of his childhood mischievousness. Roberts made himself a part of campus life in ways that went far beyond his job description. For example, he learned to play tennis so well that he coached Pfeiffer’s tennis teams for several years. His late wife Joyce taught him to play.

Jack Ingram, who’s now Pfeiffer’s deputy athletic director, joked during a retirement roast for Roberts that he “was the intramural champion in horseshoes, tennis, ping pong and billiards and he did work on the side.”

Roberts grew up in McAdenville and Belmont, the youngest of 10 children. He enlisted in the U.S. Navy at the age of 17, and after his stint in the service, he joined the Gastonia police force. He trained on the job and spent eight of his 15 years on the force as a motorcycle cop in the traffic division.

In 1967, Roberts became Pfeiffer’s head of security after the late Dr. William Briggs, a fellow Gastonian who was Pfeiffer’s dean of students, called Roberts to see if he might be interested in the job. Lester and Joyce Roberts immediately liked what they saw when they visited campus, where they would raise their two children, Ryan and Terri, in a white two-story house on the edge of campus.

After leaving Pfeiffer, Roberts signed on as the head of security at nearby Uwharrie Point, a gated community in Badin Lake, serving 20 years there before retiring for good. Until just the last couple of years, local residents could still spot Roberts riding his white 1966 police special Harley Davidson around Misenheimer and Richfield.

Contributions to the Lester F. “Snake” Roberts Endowed Scholarship may be made online at https://community.pfeiffer.edu/donation or by sending a gift to Pfeiffer University, PO Box 960 Misenheimer, NC 28109, Attn: Roberts Memorial.

Ken Keuffel, who authored this article, has served as Pfeiffer’s assistant director of communications since December 2019. He welcomes story ideas from Pfeiffer’s faculty, staff, students, alumni and friends. The form for submitting story ideas is at www.pfeiffer.edu/newsform.​