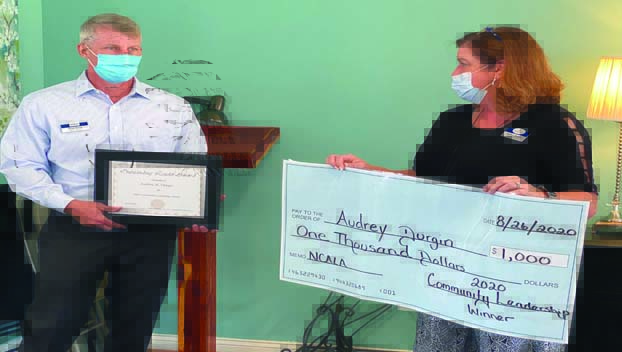 The “Outstanding Leader Award” is presented annually to one executive director in North Carolina.

Candidates are nominated by their peers, and chosen by a committee organized by the North Carolina Assisted Living Association, the state trade association representing assisted living and memory care communities.

Durgin has been with HHHunt since January 2017. She has an extensive background in the senior living and hospice care industries, having spent her previous 15 years with Hospice of Stanly County.

The team at Spring Arbor of Albemarle surprised Durgin with an award ceremony on Wednesday, and presented her with a plaque and $1,000 award.

“She makes it a joy to come to work because you know you’ll be supported,” said Tara Curlee, RN, Cottage Care director. “You know she’ll have your back.”

“She has literally made this building do a 360,” said Andrea Ross, resident care coordinator. “People who didn’t want to come to work before are eager to get there each day because of Audrey.”

Lee Pickler, president and workforce solutions expert of ScanOnline in Locust, was one of two business leaders named during the... read more