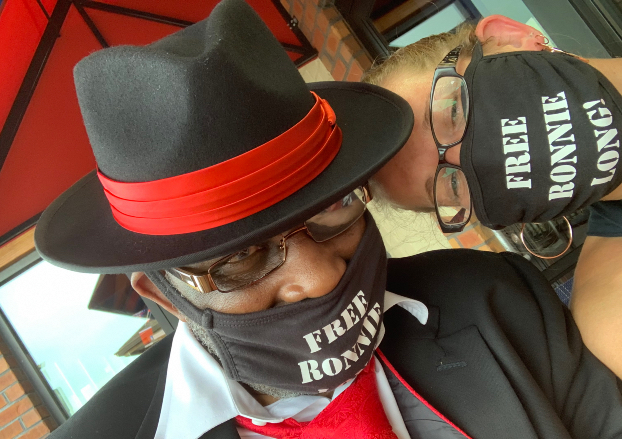 Ronnie Long with his wife Ashleigh after he was released from prison in August.

Ashleigh Long’s 35th birthday on Thursday will be one she will never forget.

After 44 years in prison for a rape he adamantly maintains he did not commit, her husband Ronnie Long was released from Albemarle Correctional Institution after the state vacated his sentence.

Long’s family, friends, lawyers and media gathered along the two-lane road outside of Albemarle Correctional Institution around 5 p.m., waiting for the moment that so many North Carolinians had protested for over the past several months. A few minutes later, Long, decked out in a suit with a matching red and black hat and wearing a “Free Ronnie Long” mask, left the prison a free man.

“They will never ever ever lock me up again,” he added.

Ashleigh Long told The Stanly News & Press that her husband’s first meal after leaving ACI was a ribeye steak, salad and macaroni and cheese. She said they planned to live in Durham.

Ashleigh said it was “surreal driving through Concord with him to drop him at his mother’s house.” Unfortunately, Long’s mother died last month before getting to see her son leave prison. 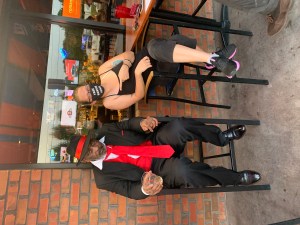 Ronnie and Ashleigh Long spend time together after Ronnie was released from Albemarle Correctional Institution Thursday.

Long’s freedom comes only days after the the United States Court of Appeals for the Fourth Circuit, which heard Long’s case in early May, ruled 9 to 6 to remand his case back to district court for further proceedings.

Writing for the majority of judges who approved the new hearing, Judge Stephanie Thacker addressed the fact that police officers hid evidence from Long “despite knowing that doing so could lead directly to Mr. Long’s death.” She wrote that “such an action is repugnant in any context. But it takes on a particularly sinister meaning here, given our country’s historical treatment of Black men accused of raping white women.”
Long’s attorney Jamie Lau, who is part of Duke University’s Wrongful Convictions Clinic, first broke the news of Long’s release on Twitter before noon on Wednesday.

“The State of NC filed a motion with the Fourth Circuit this morning asking that it immediately issue the mandate in Ronnie Long’s case,” Lau wrote. “The state said it will ask the district court to enter a writ vacating Ronnie’s conviction. In short, Ronnie Long is coming home!”

Long, who is Black, was only 19 in 1976 when he was tried by an all-white jury with the only evidence against him being the testimony of the survivor. He has maintained his innocence over the years while a growing body of forensic evidence — including 43 fingerprints taken from the scene that didn’t match Long’s — has only bolstered his case.

The forensic testing results “were concealed from him as well as from the prosecutors and those results were favorable and pointed away from him as the person who committed the crime and towards someone else,” Lau said in an interview with The Stanly News & Press last month. The new evidence also revealed officers with the Concord Police Department who spoke at the trial had testified falsely when it came to forensic evidence.

Long, a Concord native, has spent the past two and a half years inside Albemarle Correctional Institution and has feared for his life due to the coronavirus pandemic — especially since he has underlying health conditions such as hypertension, high cholesterol and diabetes. ACI has 188 inmates who have tested positive for the virus and three have died, making it one of the largest outbreaks among prisons in the state. At least 36 staff members have also tested positive.

When asked what he would tell any members of his jury now, he said: “I’m disappointed in a system that’s supposed to be about right and wrong and I’m disappointed that you have people that are in positions that don’t want to do the right thing….”

He also had a simple message of hope for others who are wrongly convicted: “Don’t give up, don’t ever give up,” he said. “Always believe you can overcome.”

He plans to spend quality time with his family, including nieces and nephews that he’s never even seen before.

“I’m going to enjoy whatever time I have left in my life,” Long told reporters.