After six years helping to oversee Albemarle’s economic development, which has included bringing in manufacturing companies along with Pfeiffer University’s new Health Sciences Center, Mark Donham is retiring. His last official day as economic development director will be next Monday.

Albemarle will miss his role in helping to transform the city from a once-struggling former textile town into a growing city that has attracted major industries.

“Mark is just an outstanding person to work with,” City Manager Michael Ferris said. “He has an unbelievable work ethic and never failed to do what was needed on our behalf to improve the economy for our city and opportunity for our citizens.”

Working to transform the city

“We were very fortunate to find Mark who was an experienced and successful economic developer,” he said, “so that helped us tremendously in getting our program started.”

“What attracted me to Albemarle was the leadership,” Donham said, specifically citing Michael.

One of his first tasks was working with departments in the city, along with the county’s economic development office, to start developing the Albemarle Business Center, a 282-acre business park at the crossroads of U.S. Highway 52 and N.C. Highway 24-27 that can hold up to 2.5 million square feet of industrial and warehouse space. There’s room in the business park for up to 12 manufacturers, Michael said.

“It’s really designed to be an optimal place to attract business,” Donham said.

He designed the business park after the Monroe Corporate Center, which he helped create during his time as economic development director. 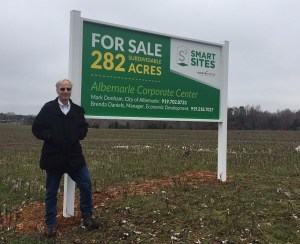 Mark Donham in front of a sign for the new Albemarle Business Center.

Donham worked with the retail consulting firm Retail Strategies, which helped the city attract the interest of a developer that opened the 150,000-square-foot Shops at Olive Place on N.C. 24-27. Businesses that have since moved into Olive Place include Hobby Lobby, East Coast Wings, Petsmart and Rack Room Shoes.

Donham also helped attract manufacturing companies to the city, such as Triton Glass, Global Packing Solutions, Quality Enclosures and Kraftsman Trailers, while also retaining industry like Enforge, which considered relocating in 2018, which helped to save 100 jobs.

“We have had the largest growth…we have ever seen over the last few years” in terms of recruiting retail and industry, Michael said, “and a lot of that was because of Mark.”

But arguably Donham’s biggest coup has been helping to shepherd the development of the four-story, 4,300-square-foot Pfeiffer University health science building across the street from Five Points Public House. Though the total cost of the project was around $16 million, Donham said the economic impact of the building, which will house graduate occupational therapy and physician’s assistants programs, will be more than $136 million over 10 years. The first group of physician assistant students are set to move into the center sometime next month.

“That’s really stimulating,” he said of the health center, adding that several restaurants have already opened up since the announcement was first made several years ago. In order to entice graduate students to live downtown, the Albemarle Hotel is currently in the process of being transformed into several apartments and retail shops, and several other housing options are being looked at.

“The successes we have seen over his tenure have not come easily and would not have been possible without the city creating this position and without Mark’s efforts,” Ferris said. “More than once during his tenure we have seen a record value of new construction investment in Albemarle.”

“I don’t think we could have found any man that could have been more involved in our community…he’s just been perfect,” Michael said.

In addition to his work as economic development director, Donham has also been an active member of the county’s Economic Development Commission, where he gives regular updates about new projects happening in the city.

“Mark is a valuable and respected member of our economic development community,” Stanly County Economic Development Director Candice Lowder said. “He has worked closely with our office on many projects, and his enthusiasm and professionalism has helped foster successful collaborations between the City of Albemarle and Stanly County. I appreciate his warmth, dedication and knowledge and wish him the very best in retirement.”

Donham, who lives in the city, is optimistic about its economic future, citing its strong water and sewer capacity, along with the city’s increased broadband access and coveted natural resources.

“Everything is pretty much aligned here…this place is going to boom,” he said.

He said the city is looking for his replacement, though he’s not been actively involved with the search. Michael said the city ideally hopes to have its next economic development director within the next four to six weeks.

Donham also is looking forward to deepening his relationship with his faith —something he has been actively working on during his time in Albemarle.

“Your family and your faith, those are ultimately the most important things in life,” he said.