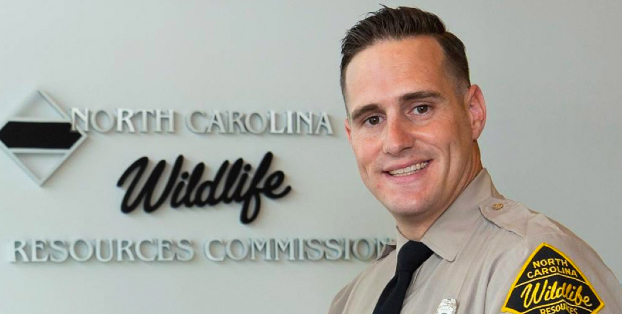 Darby Enoch was recently named N.C. Wildlife Officer of the Year. He has worked exclusively in Stanly County for the past year and a half.

North Carolina Wildlife Enforcement Officer Darby Enoch was recently named the 2020 SEAFWA Wildlife Officer of the Year for the state.

Enoch, 31, who learned of the news a few weeks ago, said he was “very honored and humbled” to receive the recognition from the Southeastern Association of Fish and Wildlife Agencies.

He is part of District 6 of the Law Enforcement Division, which aside from Stanly County includes Mecklenburg, Cabarrus, Rowan, Davidson, Union, Anson, Montgomery, Richmond and Moore counties. Enoch has worked in the division for eight years and has worked exclusively in Stanly for the past year and a half.

Sgt. Branden Jones, who won the award a few years ago, recommended Enoch and in a press release sent said that as a wildlife officer, Enoch “communicates and coordinates effectively with allied agencies” and “has maintained the highest level of cooperation and professionalism.”

Over the six-month field training period last year after being selected as a field training officer, Enoch and his trainee investigated many incidents which resulted in more than 125 violations detected, including hunting, fishing, boating, game lands and littering violations.

Enoch is an instructor for the Law Enforcement Division focusing on less-than-lethal force, especially on ASP (a type of baton), Subject Control Arrest Technique (SCAT), physical fitness and TASER training, according to the press release. He also continues to instruct at the N.C. Wildlife Basic Academy and In-Service Training.

Enoch spends much of his time in the summer patrolling Lake Tillery and Badin Lake while during the other seasons, he focuses on enforcing hunting, fishing and trapping laws.

He graduated from Mount Pleasant High School in Cabarrus County and received a degree from Appalachian State University. Enoch has also been in the Army Reserves since 2008.

As if receiving statewide recognition wasn’t good news enough, Enoch and his wife, who live in Montgomery County, gave birth last week to their first child, a son named Stone.

“I know it’s been a crazy year, but this month has been a blessing to me,” he said.