Based on projects and programs held during the year, SCC was named a National Gold Seal Chapter. The group’s Local Chapter Annual Business Report won first place at state competition and ninth place at the national level.

As a result of winning the state Parliamentary Procedure competition, the SCC team members did online testing to be named in the “Top Fifteen” finalists. That was followed by a Zoom
performance of a sample business meeting, with a final third place award behind East Mississippi College, also last year’s national winner. 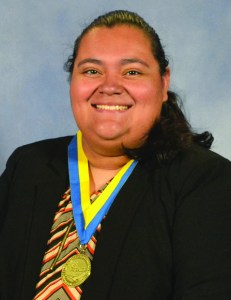 Stanly Community College’s Giselle Chavez shows off the medallion received by winners in the 2020 National Phi Beta Lambda competitive events held recently. Chavez was one of four members of the SCC Parliamentary Procedure team that received third place in the nation for their knowledge of Robert’s Rules of Order and their performance of a properly conducted business meeting. Other members of the SCC team were Jailia Vang, Monica Chang and Kimberly Gomez. Rather than meeting in Salt Lake City as planned, the national PBL conference was held virtually.

In the election of officers, Lindsey Elias, a senior of Western Carolina University and last year’s state PBL president, was elected as executive vice president. Elected as president was Gabriella Murphy from Olivet University in Chicago.

“We are very proud of our PBL chapter,” SCC President Dr. John Enamait said. “Under unusual and difficult circumstances, they completed their spring activities online and then participated virtually in the state competitions, hoping delegates would get to attend the national conference in person. When that was not possible, they remained motivated. The result is this national recognition for the chapter, the College, and the community leaders who support the organization.”

Chartered in 1974, this was the 45th year that SCC has had students participate at the national level’s leadership program and competitive events.