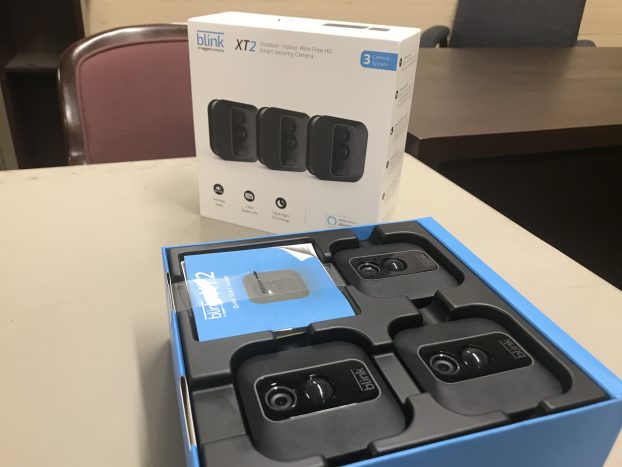 The Stanfield Town Council on Thursday night debated at length about how to utilize the camera security system the town recently purchased.

The tentative plan is for Amazon’s Blink XT2 wireless camera system, which cost the town less than $400 for two sets (each featuring three cameras), to be installed at both Log Barn Park and Pete Henkel Park as a way to deter illegal activities that have occurred over the years such as vandalism and drug deals.

Town Administrator Bridgette Helms said the cameras, which record video and audio, would likely be set up in public areas like the parking lots and walking trails where incidents have occurred in the past.

Commissioner James Kluttz said he was concerned about how the cameras would be secured and making sure they are protected to the point where people couldn’t hack into them.

“There’s a lot more bad people out there that can hack networks and cameras and computers than there are good people,” he said.

Kluttz was also concerned that the camera system only includes free cloud storage for up to 7,200 seconds, which equates to two hours of recording, before additional storage would be needed. In order to be synced to the internet, the cameras need to be within 100 yards of a computer system.

“Honestly, I think they’re more intended for residential use than they are for commercial and business use,” Kluttz said.

Commissioner James Griffin was concerned that people could tap into the cloud to retrieve information on the cameras and the fact that he wishes the town had bought a more technologically advanced camera system.

He said the town should create a camera policy, stipulating how the cameras can be used, who gets access to the information and how it will be stored, before installing them. Griffin that the cameras should not be used 24/7, but rather should be a tool for the police to be used at their discretion.

Mayor Kevin Barbee said if incidents consistently crop up at the parks then installing cameras would likely be worth it, but if the incidents are few and far between “is it something that there’s going to be a useful benefit?”

Griffin said he would talk more in depth with Stanfield Police to identify why they want to install the cameras and how they would be used.