Almond, who served on the Richfield Town Council for around 30 years, was stung by a red wasp and suffered a severe allergic reaction Aug. 22. 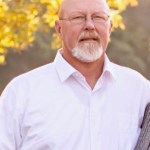 He was airlifted to Atrium Health-Charlotte where he was in a medically induced coma for two days then taken off a ventilator and able to breathe on his own.

After improving, Almond developed serious complications and did not have good results from various tests and an MRI, according to a post on Facebook from his wife, June. He was moved to Hospice Care Monday.

Almond was retired after having worked for many years as a mail carrier with the United States Postal Service. He was a member of Mt. Zion Lutheran Church in Richfield. He was also the park commissioner for the town.