‘He will be missed by us all’: Family, friends remember Terry Almond 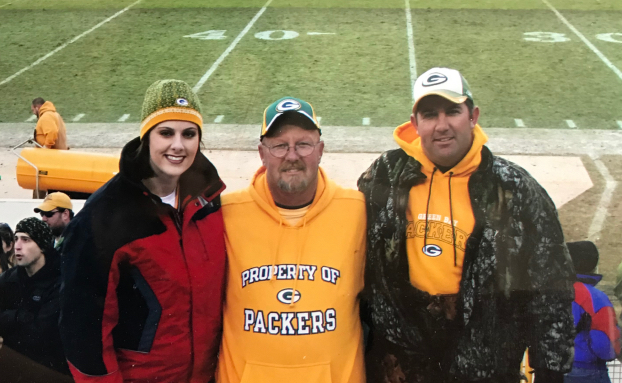 Terry Almond, center, with his daughter Tara and son Kevin at a Green Bay Packers football game. Almond died this week at the age of 71. Photo courtesy of Tara Barajas.

Even though he grew up in North Carolina, where most people naturally root for either the Washington Football Team or the Carolina Panthers, Terry Almond was always a Green Bay Packers fan.

His jersey number as a fullback at North Stanly High School was 31 — the same number worn by his favorite player Packers fullback Jim Taylor, who helped the team win the inaugural Super Bowl in 1967, said Almond’s daughter Tara Barajas, who, along with her brother Kevin, are also Packers fans.

Over the years, Almond and his family attended numerous football games at Lambeau Field, and were able to witness two of the game’s all-time great quarterbacks, Brett Favre and Aaron Rodgers, take the field. Barajas recalls one memorable trip to the aptly nicknamed “Frozen Tundra” in the 1990s when the temperature was 4 degrees, and with windchill a negative 18 degrees.

Almond was such a fervent Cheesehead that he even became a shareholder of the team in 2011, when be purchased four shares of stock.

Cheering for the Pack while simultaneously freezing in the crowd is just one of the many happy memories Barajas has of her father, who died Tuesday at the Tucker Hospice House in Kannapolis after suffering complications stemming from a wasp sting on Aug. 22. He was 71.

Almond, who suffered an allergic reaction, was airlifted to Atrium Health-Charlotte where he was in a medically induced coma for a few days before being taken off a ventilator once he was able to breathe on his own. He was able to follow commands and even spoke a few words, including “I love you” to his daughter.

After initially improving, Almond developed serious complications and he was never able to recover. Though he still opened his eyes, he could no longer follow simple commands, Barajas said. He was moved to Hospice Care Monday.

“My heart is broken into a million pieces, but I’m thankful to know you’re at peace and fully healed in heaven,” Barajas wrote in a eulogy for her father.

She said her father was always the first one to greet people at the church Sunday mornings and he let the children help him ring the church bell. He loved the Christmas Eve candlelight service and Almond always shed a few tears when the congregation sang “Silent Night” because it reminded him of his parents and grandparents who were no longer around. 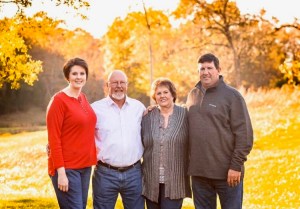 A pillar of the community

Almond first met his eventual wife June at North Stanly High. They first dated as sophomores and the courtship lasted five years before they got married. Their marriage lasted 51 years.

“He was just an all-around good person,” June said about her husband, adding that he was kind and helped anyone that he could.

“I’m just going to miss him being here,” she said, adding that he had such a love for life.

Barajas said her father loved to tell her mother that she was the “luckiest woman in Richfield” because she was married to him for so long.

Almond was retired after having worked for many years as a mail carrier with the United States Postal Service. He also served roughly 30 years as a Richfield commissioner and had also served as mayor of the town.

“The town has lost a great citizen and a great community leader,” said Mayor Terry Deese, adding that he and his wife were totally shocked when they received the news of Almond’s death on Tuesday. “He will be missed by us all.”

Deese said the town is floating various ways to best honor Almond’s memory, including establishing a Terry Almond Day, creating a scholarship in his name and planting a tree for him, along with some sort of memorial, in the park.

A resident called Deese earlier in the week telling him how he was going to miss Almond’s smile he always gave people that would always brighten their day.

As mayor pro tem, Deese was always confident Almond could fulfill his duties if Deese ever had to miss a meeting.

There will definitely be a “void in the town” with Almond’s passing, Deese said, adding that he still has not been able to fully wrap his mind around the fact that his good friend is gone. 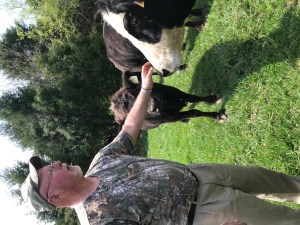 Terry Almond on his farm in Richfield. Photo courtesy of Tara Barajas.

Richfield Commissioner Jim Misenheimer, who went to high school with Terry and also goes to Mt. Zion, said that though the two occasionally differed on certain issues, “we could still go to church together on Sunday and worship the same lord.”

“Politics doesn’t mean anything when you’re looking after people you love,” Misenheimer said of his relationship with Almond.

Misenheimer said Almond always cared about helping people, especially with his role as park commissioner for the town. He would field questions from people at all hours of the day and night regarding park policies and he spent much of his time at the park, clearing debris or fallen limbs, picking up trash and making sure it was always in good condition.

June said he was instrumental in getting the park developed and mentored many of the young kids in the town.

“He’d do the things that normally people don’t see,” Misenheimer said, adding: “When you think of the park, you’d think of Terry.”

Terry and his friends liked to go duck hunting in Arkansas and on one trip, Misenheimer’s father went with them. He said the men looked after his father the whole time, including carrying his hunting gear while wading through knee-deep water.

When his father came home, he told his son: “You know, I had the best time. They just looked after me.”

Both Barajas and June emphasized that Almond was friendly to everyone, even those he personally did not know.

“He was friends with so many people in town,” June said. “He knew everybody.”

“You never met a stranger and always extended your hand to help others,” she wrote in her eulogy. “You loved your Richfield community and always tried to make it a better place to live.”

“I will never understand why God called you home at this time in your life,” Barajas concluded in her eulogy, “but I trust God and I know I will see you again one day. I look forward to the day that I can feel your big bear hugs again. I’m so thankful God chose you to be my Daddy.”

Aside from his wife and two kids, Terry is survived by grandchildren Zachery Almond, Seth Almond and Gaby Barajas; sisters Marilyn Tucker and Paula Almond, both of Millingport; and brother Mark Almond of Concord.