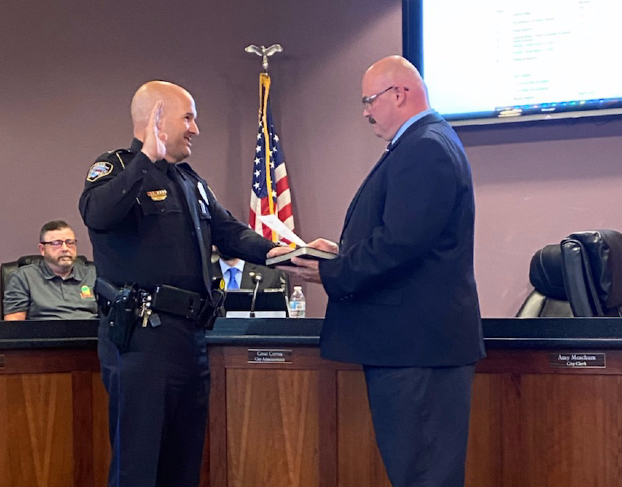 In front of a packed crowd during Thursday night’s Locust City Council meeting, Kevin O’Connor was sworn in as the city’s assistant police chief.

O’Connor, who came to the department in 2011 after serving as an officer with the Badin Police, was originally a patrol officer before working his way to a patrol sergeant. He most recently worked as a detective sergeant.

“He has been one of the best additions to this department, probably in the history of the department,” said Police Chief Jeffrey Shew.

“He’s an irreplaceable component of the Locust Police Department and I couldn’t think of a person better qualified or more deserving to be assistant chief,” Shew added.

O’Connor thanked the council and his fellow police officers, many of whom were in the room to celebrate his promotion.

“It’s a team effort every day and in my opinion, we have the best team out there,” he said.

He also thanked his family, especially his wife Kelly, for being a “steady support system,” saying that it’s not easy being the parent or spouse of a law enforcement officer.

During his time with the department, O’Connor has helped to coordinate the Shop With a Cop program each December, which fosters positive relationships between young kids and the police. He told the Stanly News & Press last year that he was inspired to start a Shop With a Cop program in Locust after participating in a similar event in Badin several years ago.

Locust Mayor Steven Huber had high praise for O’Connor, saying that during his 34 years in law enforcement, “Kevin O’Connor is one of the finest officers that I’ve ever been associated with,” adding that the new assistant chief has a heart that is “three sizes too big.”

Huber, who has spent his career as an officer with the Charlotte Mecklenburg Police Department, also offered praise to the whole department, saying “pound for pound, I would put you guys in this department against any department in this country.”