Albemarle Police Department has made an arrest in a death investigation from Jan. 11. 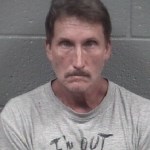 The charges resulted from a cardiac arrest call at 718 Brown Ave. A 48-year-old female was found unresponsive and later pronounced dead at the scene.

Blalock was arrested Tuesday by the Stanly County Sheriff’s Office and received a $135,000 secured bond for his release. His first scheduled court appearance is Sept. 28 at 9 a.m.