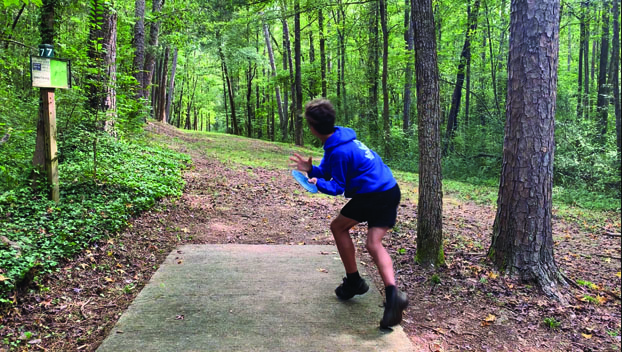 Fox Chase, the disc golf course at Chuck Morehead Park in Albemarle, hosted the 11th annual Slappy’s revenge Sept. 19. A total of 75 golfers participated in the event across nine divisions.

Nathan Brewer won his first disc golf competition when he captured first place in the open division with a -7 round, receiving $123 in the Albemarle Disc Golf Association event.

Coming in a close second was Anthony Anselmo, the highest-rated participant in the event. The 14-year-old is a three-time junior world champion and finished six strokes behind Brewer.

The amateur masters 40 and over winner was Jeremy Williams, who shot one under par, while Lynn Deese, an Albemarle resident, came in second with a +11 round.

Eric Blum, a returning Slappy’s Revenge participant, won the 50-and-over Amateur Masters Division with a round of -2.

Keith Foster was the lone participant in the 60-and-over division, earning the win.

Samuel Sigler threw a round of -4 to win the intermediate division.

The recreational division was won by Albemarle resident Matthew Carpenter, who finished with a +4 round out of 21 golfers.

Madeline Cole won the women’s division while Mitchell Massey earned the win in the junior 18-and-under division with a round of +7.