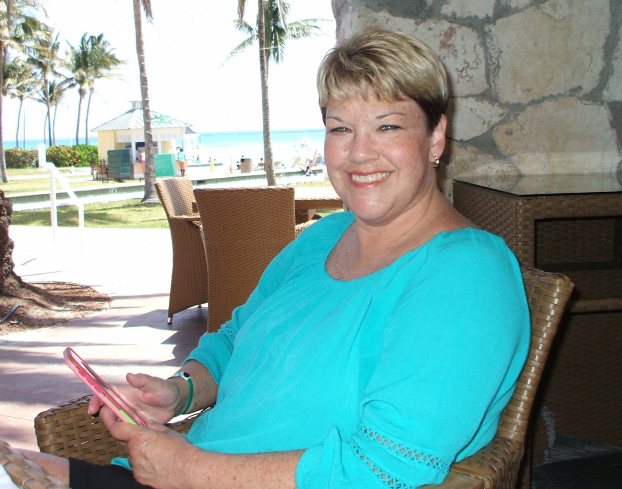 Elizabeth Basinger, who has Type 1 diabetes, is currently waiting for a kidney and pancreas transplant.

The worst case scenario for every parent happened to Albemarle resident Elizabeth Basinger three years ago when her son Jordan, a seemingly healthy 26-year-old, unexpectedly went into cardiac arrest and died after several days on life support.

As difficult and unthinkable a time as it was for Basinger and her family, she didn’t have to worry about one thing. As an organ donor, Jordan had already agreed to allow his organs to be removed and transplanted to another person.

“I don’t know what we would have done,” Basinger said, “but he made that choice for us, so it took that burden from our family.”

Jordan, who grew up in Richfield, saved two lives through the donation of a portion of his liver and his kidney. Even in their grief, Basinger and her family were happy to know that a part of Jordan would continue to live on.

“Losing a child is one of the worst things that can happen to you, but it did give us some solace in the grieving process to know that he had saved two people,” Basinger said.

The family also received letters from both recipients, which they appreciated.

Basinger, 48, was not surprised by her son’s decision to become an organ donor.

“Knowing the kind of person that Jordan was, he would have considered that an honor, to be able to help someone,” Basinger said, noting that he was a big believer in paying it forward. 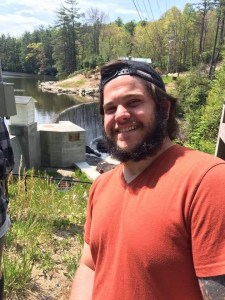 Though Elizabeth Basinger’s son Jordan died in 2017, as an organ donor, his liver and one of his kidneys helped to save the lives of two others.

Three years after the passing of her son, Basinger is hoping someone else will pay it forward for her and make the same decision Jordan did in becoming an organ donor. Basinger, a type 1 diabetic since childhood, has been a candidate for the past year for a double transplant — a kidney and pancreas — in order to avoid going on dialysis. She currently suffers from Stage 4 kidney failure, partial blindness and nerve and joint pain.

To help pay for the medical costs, including hospital stays, doctors appointments and medication, Basinger and her family have organized a spaghetti dinner at American Legion Post 76 at the Stanly County Fairgrounds from 11 a.m. to 7 p.m. Oct. 2 and 11 a.m. to 4 p.m. Oct. 3. The cost of the meal, which includes spaghetti, bread, salad, dessert and drink, is donation-only.

“We know our small-town values and we’re all trying to help each other out,” said Susan Byrd, Basinger’s sister.

For people who can’t attend the fundraiser, donations can be sent to Second Street Presbyterian Church, 105 Hearne St., Albemarle, with Basinger’s name in the check memo. A GoFundMe page was also recently created for Basinger.

Basinger is one of more than 3,200 North Carolinians on the waitlist for an organ donation, according to Kate McCullough, community services manager with LifeShare Carolinas, an organ procurement organization which coordinates the recovery and distribution of lifesaving organs, eyes and tissue for transplantation throughout 23 counties, including Stanly. Since 1988, almost 24,000 transplants have been performed in the state.

Across the state, roughly 5.2 million people, or around half the population, are registered organ donors, McCullough said, noting that the vast majority sign up while they’re either first receiving their driver’s license, or getting it renewed, through the Department of Motor Vehicles. An organ donor has the potential to save up to eight lives. The organs that can be donated include the heart, liver, lungs, kidneys, pancreas and intestines.

Basinger’s match could take longer than most other candidates because she needs a pancreas and kidney from the same donor. While there is some latitude when a recipient receives a kidney, Basinger says a pancreas is “not as forgiving” so she needs to make sure the organ is in pristine condition before any surgeries can take place. This specific criteria is one reason she hasn’t received the organs, though she is at the top of the candidate list.

The coronavirus pandemic has also affected the organ donation process because for the first few months, all nonessential surgeries were temporarily put on hold. This has lengthened the time Basinger has had to wait for the proper donor to be discovered.

Basinger has a unique perspective when it comes to organ donation, since she has now been on both sides of the process.

“It’s kind of a bittersweet feeling for me because I know the pain of the loss that that the family is going to feel,” she said. “I know how they’re feeling.”

She also mentioned that recipients can often go through a type of survivor’s guilt, struggling with the fact that a life was lost in order for the organs to be harvested and transplanted. Every time she gets a call about a possible donor, Basinger says she always prays for the family of the donor, knowing full well what they are likely going through.

Having previously been a family member to an organ donor, Basinger said it makes it all the more precious to now be in line to receive a donation herself “because I know the sacrifice that that family has had to make.”

While she can fully empathize with family members who have lost a loved one, Basinger also knows first-hand that organ donation can save the lives of others — and she is looking forward to having her life extended once she receives a new pancreas and kidney.

“The ripple effect of a transplant is so big when you think about all the people who love that person who get more time with their loved one,” said McCullough.

As Basinger prepares to receive the organs, she knows Jordan is watching over her and the rest of the family.

“I try to imagine that when there’s another donor, that Jordan is there with him, saying, ‘It’s going to be okay,’ ” Basinger said. 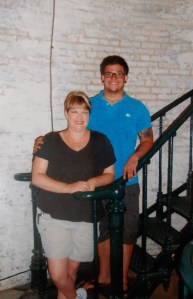 Elizabeth Basinger and her son Jordan at the Outer Banks in 2014.

The past several years have also revealed to Basinger and her family that heroes come in all shapes and sizes and it doesn’t take overt physical acts of bravery for one to be deemed a hero.

“When you think of a hero, you think of somebody running into a burning building, or pulling somebody out of a river that’s drowning, but these donors are heroes also,” Basinger said. “It’s a selfless act where you put somebody else before yourself.”

Anyone wanting more information about the donation process or to register to become a donor can visit https://www.lifesharecarolinas.org.