PEEKING INTO THE PAST – Elizabeth Eddins

Elizabeth Catherine Matt was born Oct. 24, 1919, in Canajoharie, N.Y. She graduated with a major in Biological Sciences and a minor in English from New Rochelle College in New York.

She enlisted during World War II in the Women’s Army Corps on Dec. 3, 1943. While in the service she obtained the rank of staff sergeant. 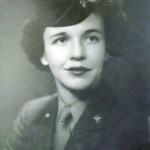 According to her obituary she was a homemaker but her daughter, Beth (Eddins) Laughridge, was a little more descriptive. She raised “kids, horses, goats, ducks, cats, dogs (and let’s not forget the monkey), to whipping up our centennial clothes (and repairing the fringe on the surrey that the goat ate) to repairing any farm equipment, she could do it all. With style and grace. She was an inspiration and role model who taught us to treat everyone with dignity and respect regardless.”