New superintendent excited to be coming back home to Stanly

Stanly County Schools’ months-long search to find the successor to former superintendent Dr. Jeff James culminated in a happy homecoming as Jarrod Dennis, a Stanly native and West Stanly High graduate, signed his contract during a recent school board meeting to accept his new position.

Though he was offered the job a few weeks earlier, it didn’t really sink in until he officially put pen to paper, he said.

“I was ecstatic to have been offered the job,” said Dennis, who’s worked in education for 20 years and is deputy superintendent at Person County Schools in Roxboro. “It is kind of surreal because these are highly competitive jobs…and I know I had to interview against some very seasoned, experienced educators.” 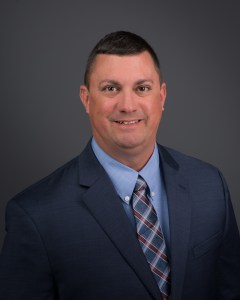 Beginning on Nov. 2, his first day on the job, Dennis will join an elite network of educators, as there are only 115 superintendents in the state. He will replace Vicki Calvert, who has been interim superintendent since James left at the beginning of June to become the superintendent at Iredell-Statesville Schools.

The school board plans to formally introduce Dennis to the community during its Oct. 6 meeting.

Dennis, 43, was chosen among a field of close to 30 candidates, according to School Board Chairman Melvin Poole.

“We just felt like he would be a good fit for Stanly County with his background, being familiar with the area,” said Poole. “Plus…we felt like he could give us a long-term commitment so we can have some stability and stop having a revolving door (of superintendents).”

“I think he’s young and he’s going to bring a lot of energy to the system,” Poole added.

A product of the school system

Though born in Albemarle, Dennis grew up in Oakboro. He attended Oakboro Elementary, at the time a K-8 school, and West Stanly High School.

While at West Stanly, he was involved in the extra-curricular group Future Teachers of America, which helped him cement the idea that he wanted to pursue a career in education once he graduated. As a member of the group, Dennis was afforded the opportunity to spend some time teaching in the class of his former biology teacher Mark Rowles.

While he had many great teachers, he said he was particularly inspired by Rowles and Steve Teeter, another science teacher.

After graduating from Lynchburg College with a degree in psychobiology he planned to pursue a career in the medical field, but ultimately nixed it in favor of teaching. He began his career as a science teacher at Forest Hills High School before moving to Chatham Central High School.

As a teacher, Dennis mainly taught biology and earth science, though he has also taught anatomy, physiology, chemistry and physical science.

After a stint serving in the N.C. Army National Guard in Iraq from 2005-2006, Dennis eventually transitioned to school administration, where he served as assistant principal for Northern High School in Durham and principal for Orange Charter School (now Eno River Academy).

He was a principal at Person High School for two years before moving into his current job as deputy superintendent at Person County Schools, a position he’s held since May 2015.

Dennis has a Master’s of School Administration from North Carolina State University, an Education Specialist Degree from East Carolina University and a Doctorate in Educational Leadership from Liberty University.

He’s married to his wife Susan and they have three children, Amelia, 10, Ava, 7, and Lucas, 3. In his free time, he enjoys playing golf and gardening.

Excited to be home

In the interview with Dennis, he mentioned many times how happy he was to be coming back home. While he has worked in positions across the state, Dennis said he had always planned to return to the county in some capacity, likely as a teacher or principal, but never imagined he would come back to be in charge of the school system.

“There was always an inkling somewhere in my mind that I may come back and I would want to come back,” he said.

He said it was “surreal” to be back during the board meeting, where he noticed so many familiar faces that he hadn’t seen in decades. Seeing Melvin Poole reminded Dennis of his days as a student because Poole’s wife was one of his teachers at Oakboro.

Since signing his contract, Dennis said he has been flooded with congratulatory social media posts, emails and texts from former high school classmates who now work in the school system that he has not seen or heard from since he graduated from West Stanly in 1995.

Once he heard about the opening, Dennis thought, as a deputy superintendent, the position was the next logical step for him in his educational career. He knew the school system’s history and had closely followed what had happened in the recent past with the previous superintendents who had come and gone.

Even though he wanted to become a superintendent, he didn’t want to move his family across the state to a school system he knew little about. Stanly County Schools was definitely not that.

“I was like, well you know, maybe they could use some stability and maybe I could bring some stability,” he said. “And being from the area, I could probably acclimate a littler faster than most…and it could be a win-win for both me and the school system.”

Dennis plans to visit the county in the coming weeks to talk with Calvert and visit the schools and principals to get more acclimated with the inner workings of the system.

While he admits it’s not ideal to be transitioning to a new position in the middle of the coronavirus pandemic, his short-term plan is to focus on guiding SCS through the pandemic.

“I don’t think we can even talk about having other visions until we get to the other side of this,” he said.

Though he’s a little nervous about his new position, Dennis is also excited and ready to work towards making SCS a top school system in the state.

He’s also personally invested with SCS, since his two oldest children will be enrolled in the school system.

“I want my kids to go to Stanly County Schools or I would not have applied for the job,” he said. “I want them to have the same experiences that I did.”