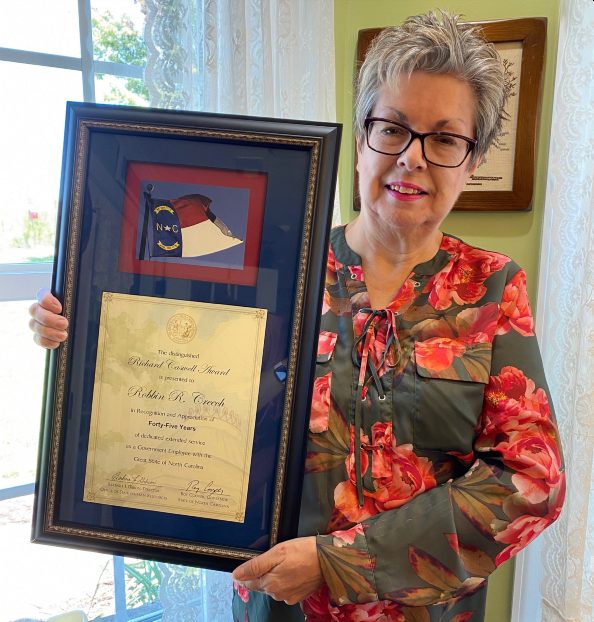 After more than 45 years working in the Mecklenburg County Clerk’s Office, Stanfield resident Robbin Creech was recently awarded the Richard Caswell Award for her service.

She was initially notified that she won the award in March. She was supposed to travel to Raleigh to receive the award, but the coronavirus pandemic canceled those plans. Creech was mailed her award a few weeks ago.

“It meant the world to me,” she said about receiving the award. “It meant that somebody was actually noticing not just me, but all the other the recipients, too, of the time that they’ve invested in working.”

Creech began working at the courthouse when she was 18 in December 1974 when work was completed either on a typewriter or written in docket books. Though she retired in 2009, she still works several days a week at the office and plans to work about two more years.

The best part of her job, she says, has been interacting with different people, including lawyers, judges and members of the public.

Originally from Mecklenburg, Creech has lived in Stanfield for the past 11 years. She came to the county after her daughter married a man from Stanfield.

She was one of 16 employees who received the award, according to a state press release. The recipients, who work at five state agencies, join the ranks of long-serving employees who have earned the award since it was established in 1998 in tribute to North Carolina’s first governor.

“Especially during the COVID-19 pandemic, we are grateful for the deep institutional knowledge and steadfast experience of our Caswell Award honorees,” said Barbara Gibson, director of the Office of State Human Resources. “They can truly say they’ve ‘seen it all’ in a career than spans a stunning scope of work across five decades. We are grateful for their enduring commitment to public service as state agencies remain focused on providing needed public services in challenging times.”

Richard Caswell was a Maryland native who dedicated most of his adult life to North Carolina. He was the first Orange County clerk of court before taking up arms during the Revolutionary War. He later became a member of the colonial assembly, where he was a champion for free public education. Caswell became North Carolina’s first governor, where he served from 1776-1780.