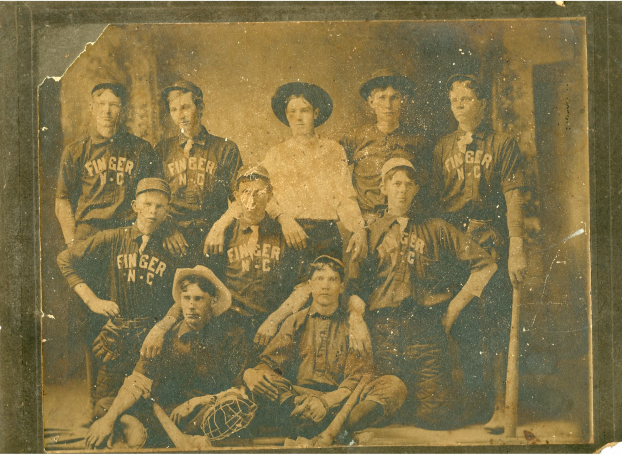 One of the first known baseball teams in the county, the Plowboys, based in Finger, took their name because they plowed all day and played baseball on the weekends. Photo courtesy of Megan Sullivan.

For the first time, the Stanly County History Museum has a virtual 3D tour on its website of its latest exhibit — the history of baseball in Stanly County.

Titled, “Play Ball! Stanly County Baseball through the Years,” the exhibit, which began in mid-May, has a trove of artifacts, pictures and videos about the origins of baseball not just in Stanly but the in country as well.

The first professional league, the National Association of Professional Base Ball Players, was founded in 1871, six years after the Civil War ended. The National League was created in 1876, followed by the American League in 1901.

Tons of recreational leagues across the country were founded at the beginning of the 20th century, including the Plowboys, one of the earliest known baseball teams in Stanly. The team, which was based in Finger, was so named because they plowed all day and played baseball games on the weekends.

Included in the exhibit is a picture of a baseball game being played at the Salisbury Prison in July 1862. The players are Union soldiers playing by “New York” style rules. Though baseball rules had varied across the country — some allowed players to directly throw a ball at a player to count as an out, after the Civil War, the “New York” style of play spread throughout the country.

In 1890, the newly-formed National Association of Baseball agreed to ban Black players from playing in the organized league. Although barred from playing in the professional leagues, Black baseball teams still played throughout the country, playing other all-Black teams and often challenging all-White teams to exhibition games. The National Negro League was formed in 1920, followed by other professional Negro Leagues.

Moses Fleetwood Walker was one of the first Black men to play in Major League Baseball. He played for the Toronto Blue Stockings for the 1884 season and was the last Black man to participate in professional baseball until Jackie Robinson broke the color barrier in 1947.

Stanly County had numerous Black baseball teams, including the Badin Sluggers, the Kingville Gangbusters, the Norwood Black Sox and the Norwood Pirates. The Badin Sluggers were known as being one of the fastest teams in the state. The Kingville High School baseball team’s coach in the 1940s was its principal, Dr. Elbert Edwin “E.E.” Waddell, the namesake of the current community center facility. 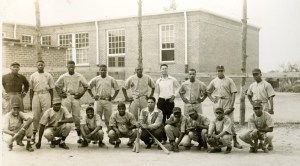 For the exhibit, museum director Megan Sullivan showcases footage of one of the earliest known videos taken of a baseball game. On May 20, 1898, Thomas Edison captured the first moving images of a baseball team. Titled “The Ball Game,” the 28 seconds of film features a player with the name of “NEWARK” on his jersey.

Textile leagues were popular in the South and the Wiscasset Mills team, the Spinners, finished first in its league in 1940 and advanced to the Piedmont Textile League Playoffs. That same year, the Albemarle Junior American Legion team made the finals of the Little World Series and ultimately beat San Diego in five games played in front of an average of 10,000 fans in the city. Due to their win, the players were guests at the 1940 World Series. 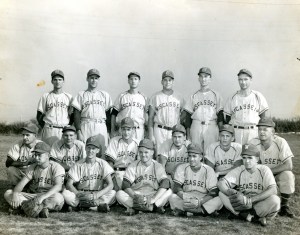 Textile leagues were very popular in the South during the early 20th century, and the Wiscasset Spinners advanced multiple times to the Piedmont League Playoffs. Photo courtesy of Megan Sullivan.

In 1948, Albemarle had a Class D NC State league franchise, the Albemarle Rockets. Brothers C.W. and C.L. Morton had recently completed building Morton Ballpark in Albemarle for $45,000, including a $14,000 modern lighting system that allowed for the first time for games to be played at night in the city.

The exhibit also includes stand-out performers such as Pfeiffer baseball coach Joe Ferebee, who won 667 games with the college and led the Falcons to 10 conference championships and five NAIA District crowns, and more recent teams like the South Stanly High baseball club, which has won three state championships in the last 10 years.

While large groups are prohibited from entering the history center, families and smaller groups can come in to see the exhibit, though masks are strongly encouraged.

“The coronavirus has definitely been a learning experience for people that work in museums,” Sullivan said.

While she’s had to think outside the box due to coronavirus restrictions, “it’s been a little exciting because it’s made me get out of my comfort zone,” in terms of providing content to the community, she said.

In addition to the virtual exhibit, Sullivan also created a series of videos uploaded to the History Center’s Facebook page, titled “Treasures in the Attic,” where she shares information about some of the oldest artifacts in the center’s collection. One such artifact is a document signed by Richard Dobbs Spaight, the eighth governor of the state and a signer of the U.S. Constitution. He died from injuries sustained from a duel in 1802 with Congressman John Stanly, whom the county is named after. Sullivan says it was the last legal duel in the state.

The History Center is going to have a virtual ghost tour, where a storyteller will travel to and discuss seven purportedly haunted sites around downtown Albemarle.

There will also be a “Murder, Mystery and Mayhem” driving tour throughout the county in October where people can learn about 14 locations where people were allegedly murdered. Sites include the Snuggs House and various cemeteries featuring grave sites of murder victims. Maps and background information about the locations can either be picked up at the History Center or downloaded from the website.

“We’re trying to find ways to help out the teachers and parents,” Sullivan said.