Barry Roberson has tamed his disease — and brought joy to others in the process. 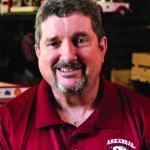 In 2012, Roberson was diagnosed with Parkinson’s disease and Progressive Supranuclear Palsy, and his doctors gave him four to seven years to live. He was no longer able to work or drive, and he had broken many bones from falling several times a day. He asked God for guidance on how he should live the rest of his life.

The answer was to build dollhouses.

You’ve got to be kidding me, God, Roberson thought.

He began working on one anyway, albeit without much enthusiasm. Roberson’s wife, Dawn Glenn Roberson, a Pfeiffer alumna of the Class of 1981, sensed that her husband’s creative pursuits needed a purpose. So, she suggested that he build a dollhouse as a gift for Kate Zidanic, who, like the Robersons, is a member of Mineral Springs United Methodist Church. He did.

Zidanic, a young girl, had cancer, and the dollhouse brightened her life immeasurably. She has been cancer-free for several years.

Roberson, a former history major at Pfeiffer, became energized — to the point that he soon began taking on many other similar projects in a “miniatures ministry.”

Over the years, he has made more than 120 miniatures, giving them primarily to kids with life-threatening diseases and to charities throughout the South. His output includes not only traditional dollhouses but also churches, kids’ barns, gas stations and sports fields. He made “The Joe,” a miniature baseball field, in honor of Joseph Ferebee, Pfeiffer’s legendary baseball coach, on the occasion of his 100th birthday last year. Ferebee died this past March.

“I have been blessed because of this experience,” Roberson said. “My faith is stronger, and I hope I am a better person. God called me to build miniatures, and l took it to heart.”

Roberson’s miniature-making has also brought renewed attention to his medical issues and what can be done as supportive therapy. As a recent News and Observer story pointed out, his hands stop shaking when he works on his miniatures. Roberson said his doctors endorse his work “because it helps me by using my physical and cognitive skills, which is therapeutic to my symptoms.”

“It also keeps my mind off my symptoms,” he added. “All agree it has made my life longer than what was first thought.”

Roberson remains quite prolific. He’s making a miniature for Union County Crisis Assistance and another for a man with Alzheimer’s disease. He’d welcome another opportunity to make a miniature for a child with a life-threatening disease.

“I know what it’s like to fight a disease,” he said. “If a miniature I’ve made helps someone forget their situation even for a short while, then it has served its purpose.”