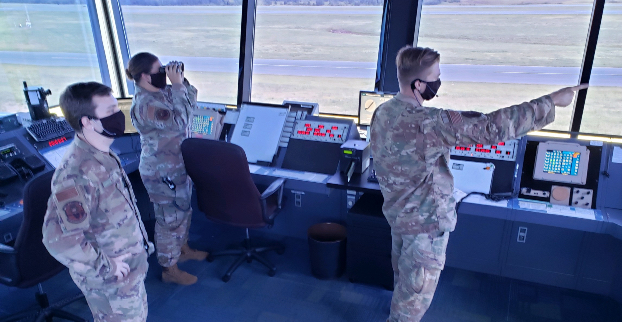 Since the coronavirus pandemic first began in March, seemingly every part of society has been infected. The 235th Air Traffic Control Squadron based in New London, which is part of the 135th Airlift Wing of the N.C. Air National Guard out of Charlotte, has been no exception.

Following directives laid out by the U.S. Department of Defense, the squadron, which consists of 70 members, is operating under Health Protection Condition (HPCON) Charlie, which is a level indicating “sustained community spread” of the virus. Charlie is the second highest COVID-19 safety level behind only HPCON Delta, which indicates “widespread community transmission.”

A plane flies over the Stanly County Airport. Photo courtesy of Jacqueline Plumley.

Aside from wearing face coverings, social distancing and thoroughly washing hands and cleaning equipment, Plumley said, the 235th is currently operating under limited access, where only required personnel with official business are allowed on the base. Normally the base and its operation tower are open to the public and the unit regularly hosts tours for elementary school classes and ROTC groups.

Plumley said the 235th is trying to limit the number of people operating inside the air traffic tower at any given point. She added that authorized workers are encouraged to telework as much as possible to reduce the amount of foot traffic.

Dealing with the coronavirus pandemic “is definitely a learning curve for everyone because it’s something new that we’re dealing with, but personally I’m very impressed with how the Air National Guard has handled things,” she said. “They’ve really put safeguarding unit members as a number one priority.”

The main mission for the 235th is to train air traffic controllers who can then be deployed all across the world. The controllers at the 235th monitor the position, speed and altitude of aircraft in their assigned airspace, which are mainly Boeing C-17 Globemaster aircrafts that fly into Stanly County Airport from the 145th Airlift Wing’s location at Charlotte Douglas International Airport.

Plumley said the pandemic hasn’t stopped the C-17s from continuing to fly into Stanly County.

While Plumley couldn’t comment on whether any members of her unit have tested positive for the coronavirus, the Department of Defense reported on its website that more than 7,136 members of the Air Force, which the Air National Guard is under, have been infected.

She said the different units within the 145th Airlift Wing have helped the public in a variety of ways during the past several months, including transporting food and personal protective equipment to state entities and assisting local food banks.

“This is our time to shine, when the state needs us,” Plumley said about the Air National Guard.

Having the opportunity to serve people across the state “has really shown the good that the Air National Guard has to offer,” she said.