N.C. State Rep. Scott Brewer is counting on his experience as a difference maker as he seeks reelection in the coming election.

The Democratic incumbent, whose District 66 encompasses Richmond, Montgomery and part of Stanly, believes his time as a lawyer, chief district court judge and now state representative gives him the necessary experience to win election in November against Republican opponent Ben Moss, a Richmond County commissioner. 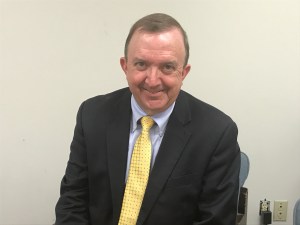 “I think I have the greatest breadth of experience to deal with the issues that confront us,” he said.

He highlighted his time as a judge in the court system where he learned “not to make knee-jerk reactions” and instead made decisions based on studying the issues and listening to all the relevant arguments.

He worked in the district attorney’s office and as a district court judge for Judicial District 20A (covering Richmond, Anson and Stanly counties) from late 1987 until 2014.

Brewer, 62, has been representative for District 66 since last May, when he was appointed by Gov. Roy Cooper to serve out the remainder of former Rep. Ken Goodman’s term. Goodman resigned from the seat in mid-April after he was nominated and subsequently appointed by Cooper to the North Carolina Industrial Commission.

During his now 17 months in office, Brewer says he’s most proud about working to bring coronavirus funds to the citizens of his district.

His main focus throughout the year has been the coronavirus pandemic and the threat it continues to pose to the lives and livelihoods of his constituents.

“We have to just make sure our citizens are safe and the most effective thing that can be done is to wear a mask,” he said.

Brewer, who is not sure why certain people are still opposed to wearing masks, has personally been hit hard by the virus.

His 95-year-old mother who lives in a congregate living facility in Durham contracted the virus. She has since recovered.

“I haven’t talked to her since March which has really been tough,” he said.

While his plan was to hold town halls and meetings across the district, the coronavirus has forced Brewer to instead connect with voters and local officials, including the Stanly County Democrats, through phone calls and online platforms like Zoom.

While it’s been frustrating not meeting and connecting with constituents in person, “it’s not safe and I don’t think it’s responsible to be getting out and talking to people,” he said.

His biggest disappointment during his time in Raleigh is that Democrats and Republicans have not found a way to come together to compromise and seek common ground.

“There’s room for negotiation on everything and we owe it to the people to find a way to reach middle ground on what we’re doing.”

One of Brewer’s chief issues is working to expand high-speed, broadband internet access, especially for families who have children engaged in remote learning. While he knows it’s expensive to install broadband to all parts of the district, he said it’s absolutely necessary to ensure families and businesses have such a vital commodity.

“Broadband really is the infrastructure of the 21st century,” he said.

The coronavirus pandemic has only underscored the fact that people still need access to reliable and affordable health care, he said. He is a proponent of expanding Medicaid access across the state. In April, Brewer was a co-sponsor of House Bill 1040, which seeks to expand Medicaid in North Carolina and increase access to affordable health care for more than half a million North Carolinians.

He said a Cone Health study has found that Medicaid expansion would help more than 3,400 individuals in Stanly County gain access to coverage.

“Expanded health care coverage means lower costs and premiums for all of us because of lower levels of expensive, unreimbursed Emergency Room care,” he said.

Rural hospitals in his district, like Atrium Health Stanly, “would be able to recover between one and two million dollars a year in currently uncompensated care, if we were to expand Medicaid,” he said, nothing that “reimbursement of some of the current uncompensated care will help keep these hospitals open.”

Brewer grew up in Durham and received his Bachelor of Arts degree from the University of North Carolina at Chapel Hill. He later received his law degree from Campbell University. He lives in Rockingham with his wife Karen and two daughters, Lauren and Leanne.