Gianferante has a medical mission to serve 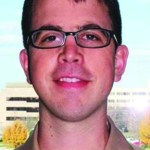 Matthew Gianferante epitomizes the Pfeiffer University ideal of servant leadership in a highly scientific way. He serves as a medical officer in the Clinical Genetics Branch at the National Cancer Institute, and he’s a lieutenant commander in the United States Public Health Service. His father, Dave, a 1972 Pfeiffer graduate, works at Pfeiffer as the head coach for the men’s and women’s golf programs and as assistant to the athletic director, Danielle Lafferty, a 2015 Pfeiffer graduate.

Gianferante was nominated for the Distinguished Alumni Award by Jane Cashion Brietz, a 1968 graduate. His research, which has been published in scientific journals, explores the relationship between germline or hereditable genetic factors and susceptibility to developing certain types of pediatric cancers or blood disorders, with the ultimate goal of better understanding the underlying biology of these diseases. He has presented his work on pediatric cancer at domestic and international meetings.

As for his health service work, Gianferante has been deployed seven times for medical missions since 2017, including hurricane relief in Puerto Rico and in North Carolina. He has also participated in two southern border screening missions and in two COVID-19 relief missions.

The successful, caring person that Gianferante has become can be traced to his time at Pfeiffer and the work he immediately pursued after graduating.

During his Pfeiffer stint, he majored in biology and chemistry, and he was an inaugural recipient of the Milton Rose Fellowship. As part of the fellowship program, he studied the effect of water runoff under the guidance of his mentor, Dr. Mark McCallum, a professor of biology. In the summers of 2003 and 2004 he was selected for summer research internship programs at the University of Florida and the National Institutes of Health.

Gianferante was active in the Misenheimer community as a Bonner Leader, as a peer tutor in the Wick S. Sharp Learning Center, and as president of the Outings Club. He received the Order of the Sundial Award, which is presented each spring to graduating seniors who have exhibited the highest levels of leadership, scholarship and student engagement during their time at Pfeiffer.

After Pfeiffer, Gianferante worked as a microbiologist at the Massachusetts Public Health Department in Boston. He then decided to become a physician, graduating from the Uniformed Service University (USU) in 2011. He completed his pediatric residency at Tufts Floating Hospital for Children in Boston, where he was recognized for distinction in research on T-lineage acute lymphoblastic leukemia.

After that, he undertook a pediatric hematology-oncology fellowship at the National Capital Consortium of the Walter Reed National Military Medical Center in Bethesda, Md. In 2015 he received the center’s Pediatric Fellow of the Year Award for excellence in teaching, and he became an assistant professor at USU.