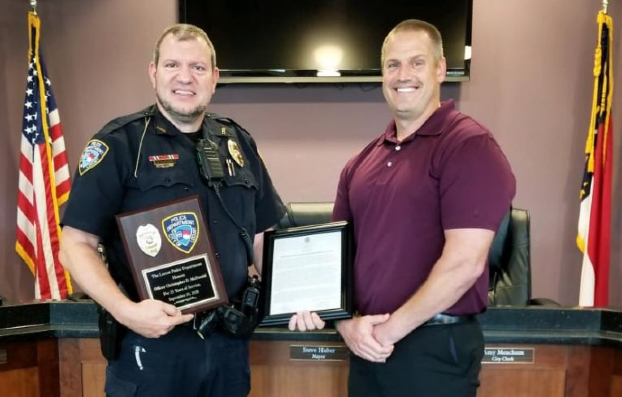 As a child growing up in Albemarle, Christopher McDaniel enjoyed playing the classic kid’s game cops and robbers with his friends. Each time he played, he always wanted the role of the cop. It was a position he aspired to hold when he was older.

His dream eventually became reality and after 25 years as a law enforcement officer, McDaniel, 50, has retired from the Locust Police Department. His last day on the job was Sept. 29.

McDaniel began his career with the Mecklenburg County Sheriff’s Office in 1995. He eventually achieved the rank of captain in 2012. During his time with the sheriff’s office, McDaniel helped the agency through its initial accreditation process, served as logistics manager for the Sheriff’s Emergency Command Center during mass casualty and natural disaster events and oversaw training for implementation of new technology.

After almost two decades working in Mecklenburg, McDaniel came home to Stanly County in 2016, where he initially worked at the Albemarle Correctional Institution for several months. He then joined the Stanfield Police, where he worked for three years as a patrolman, field training officer and in-service training coordinator. During this time, he also worked as a captain and detention administrator for the Stanly County Sheriff’s Office. McDaniel began work for Locust Police in September 2019.

The moments that stand out to McDaniel and that he’s most proud of during his career have been when he was able to make a difference in people’s lives. He cites two examples in Locust and Stanfield when he located two elderly people who were missing and were the subjects of Silver Alerts.

It was a special and gratifying moment to “be able to reunite those people with their families and see the reaction and the elation and celebration on their (family’s) faces when they found out that their loved one was safe and unharmed,” he said.

He said that conducting patrol operations was always rewarding for him because it allowed him to be first on the scene when people are experiencing a traumatic event.

“To be able to offer them some degree of comfort and security is one of the most fulfilling aspects of the job,” he said.

McDaniel received the “Everyday Hero” award in 2018 by the Officer Jeff Shelton Foundation. The award recognizes a law enforcement officer in the county who has made a difference in the community that he or she serves.

Locust Police Chief Jeff Shew had high praise for McDaniel, saying that his best attribute “was how he treated all he came into contact with as an officer and his dedication to community service. He always treated everyone on both sides of the law with respect and fairness, and he was a very positive and honorable representative for our field.”

He now lives in southwestern Florida with his wife Courtney and 15-year-old son Hunter and hopes to be involved in the education and training of future law enforcement professionals. He recently applied for a position as a professor of criminal justice at Florida SouthWestern State College and as a part-time instructor of justice studies at Florida Gulf Coast University. He also is looking forward to playing a lot of golf.

Even though he’s retired from his work as an officer in Stanly, he’s still open to the possibility in Florida, as he recently applied for a position with the Collier County Sheriff’s Office. Though he’s not sure if he’ll get the position, there’s a simple reason why he’s not quite ready to fully divest himself from his career as a law enforcement officer.