The Local Room, a new restaurant in Locust, is set to open this month.

While many restaurants have had to close as a result of the pandemic, a new one which has been in the works since January of last year is on the cusp of opening in Locust.

“It’s terrible timing,” co-owner Matthew Harris, who grew up in Albemarle and lives in Stanfield, said about opening up The Local Room in the middle of the coronavirus pandemic. “But the way I approach it is you take it and you make lemonade…and you got to figure out how to make it work.”

Harris, along with his business partner, and former Pfeiffer tennis player, Jimmy Molina, originally bought the property, at 215 S. Central Ave., in 2018. Not knowing exactly what to do with it, they consulted with City Administrator Cesar Correa and Locust Planning Director Scott Efird, who suggested a restaurant.

The partners eventually convinced Harris’ longtime friend Matthew Klepp, a restaurateur in the Charlotte area, to help them open a restaurant. Klepp, who will manage the day-to-day operations, has helped to launch several restaurants including Old Stone Steakhouse and The Jail House, a whiskey and cigar bar, which are both in Belmont. 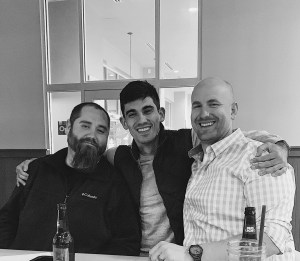 Matthew Klepp, Jimmy Molina and Matthew Harris are the owners of The Local Room, a new restaurant in Locust, set to open sometime in October.

Harris said the tentative plan is to open Local Room this month.

When discussing name options, the partners wanted a place that would appeal to the community.

“The word ‘local’ kept popping up in our discussions,” Harris said and after brainstorming a combination of different names, The Local Room was the one that stuck. “It’s really taken traction around here,” he said.

The restaurant is classified as a gastropub and will have a variety of of menu items from the more expensive, like steak and salmon, to the more casual and affordable, like burgers, ribs and sandwiches. Harris says the restaurant will be similar to 73 & Main in Mount Pleasant and Five Points Public House in Albemarle.

Local Room will begin with a relatively modest, straightforward menu, though it will likely expand to include additional dishes in the future.

“The idea first though is to get good at a few (items) and then we’ll start peppering them in as we grow,” Harris said, adding that the restaurant, in a few months, plans to introduce dinner specials each night.

The partners want to bring a casual upscale environment to Locust, where people can be treated to a quality meal at relatively affordable prices.

“We don’t want them dressed in a tuxedo,” Harris says. “Blue jeans is fine.”

The inside of the building, which is 5,000 square feet and has 140 seats, is a “modern industrial meets country farmhouse” kind of a feel, Harris says. There is also an outdoor 2,000-square-foot patio with 88 seats.

He hopes the restaurant, which he calls “French American with a Southern flair,” will be a place where people will come for any occasion.

“We want you to come in and feel like you can bring your significant other here for a fancy dinner, your child here for a birthday party, your business partners here for a corporate event,” he said.

Even though opening during a pandemic has its challenges, Harris says that the limited seating will give them a chance to open “without all of the extra pressure” and will give them time to work out the kinks that naturally come with a new business.

“It also lets us learn to operate lean,” said Harris, who has been doing all of the general contracting on the project to save money. “And if we can operate lean during Covid, then once this is over, our business strategy will be golden.”