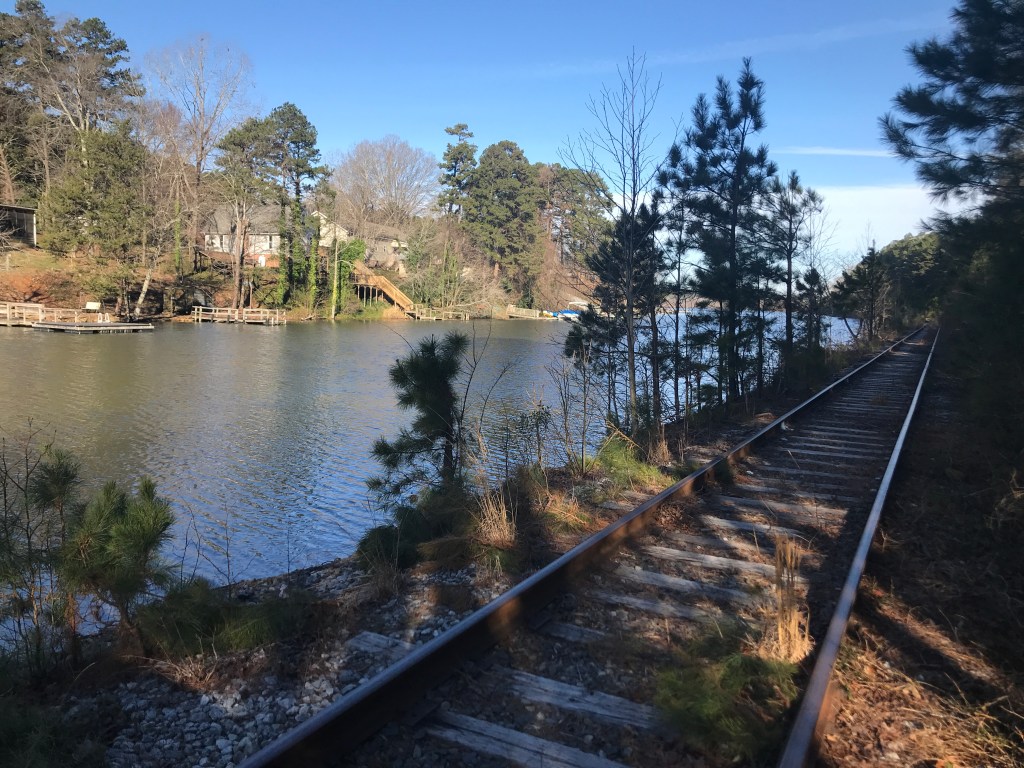 This railroad track runs alongside beautiful stretches of Badin Lake.

The plan will be exactly what its title indicates: a guiding star for the organization to follow as it works to preserve the Yadkin River’s watershed.

“Clearly, we can’t cover the whole basin like we’d like to, but hopefully this will break it down into some bite-sized pieces and we can work with local stakeholders to work on the problems we’ve identified,” Yadkin Riverkeeper Executive Director Edgar Miller said.

Developed over the course of several years in conjunction with local governments, stakeholders and with the help of the Piedmont Triad Regional Council, the 52-page plan features maps, charts and statistics that show the areas of the river basin that are most vulnerable. It also provides recommendations and next steps for how to improve and preserve the watershed.

“(This plan) will help us prioritize where we want to focus our limited resources,” Miller said.

The plan determined that the top 10 percent of watersheds with the highest stress values are primarily located near urban centers, such as Salisbury, Winston-Salem and Statesville, among others. The watershed is most vulnerable in these locations in part due to the high number of impervious surfaces that developed areas contain. Impervious surfaces lead to increased runoff of pollutants, Miller said.

The amount of impervious surfaces near waterways is set to increase in coming years. While only 13 percent of the Yadkin River’s watershed is currently considered developed, the plan projects that 32 percent of the watershed will be developed by 2060. Despite the threat that more development could pose to the river’s waterways, Miller said the riverkeeper isn’t trying to “kill” development. However, Miller said that he would like to see low impact designs and would rather avoid the development of some sensitive areas along the river and its tributaries.

“As people become more aware of the connection between runoff and what’s happening in the river and the lake, we can start building public support for these more appropriate design approaches or limiting development in sensitive areas,” Miller said.

The Roadmap to a Cleaner Yadkin plan also identified several key river tributaries for conservation and restoration, including Grants Creek in Rowan County. Miller said the Yadkin Riverkeeper would like to help address the issues of flooding and stormwater runoff that have plagued Grants Creek.

Another point of emphasis in the report was High Rock Lake, which the report lists as an impaired waterbody due to its high levels of turbidity (presence of individual particles in the water), chlorophyll-a and pH.

“These water quality impairments impede the lake’s ability to support aquatic life and recreation and increase the number of harmful algal blooms,” the report stated.

Last year, the presence of cyanobacteria was discovered in High Rock Lake. Miller said that the issues facing High Rock Lake are a multi-source problem and that both nutrient and sediment pollution negatively impact the lake’s water bodies. The Roadmap to a Cleaner Yadkin plan calls for developing a nutrient monitoring and management strategy, among other measures.

To read the entire Roadmap to a Cleaner Yadkin, visit yadkinriverkeeper.org. The Yadkin Riverkeeper is a member of the Waterkeeper Alliance, a network of organizations dedicated to preserving water resources.