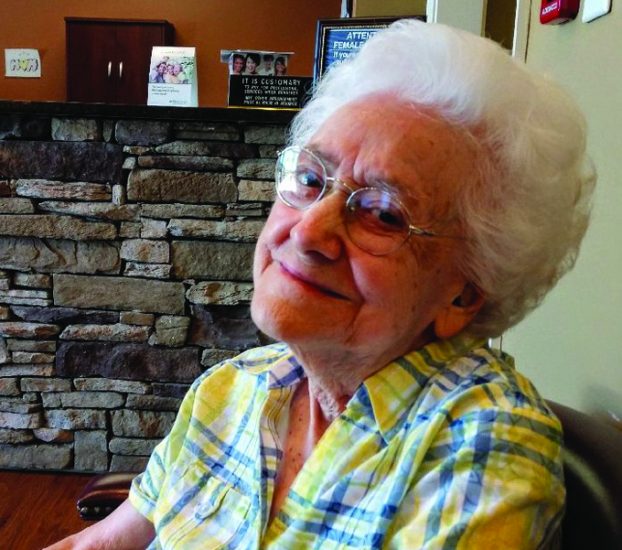 Iris Almond Waller celebrates her 100th birthday on Oct. 16. She was a lifetime resident of Albemarle, but has been living in Greenville, S.C. with two of her daughters for the last three years.

Iris was the oldest daughter of Lemuel and Dallie Almond. She had three brothers who are all deceased, Hubert, Glenn and Don. Peggy Small, her sister, lives in Charlotte.

She was the salutatorian and secretary of her class. She worked in the office at Wiscassett Mills for a number of years before marrying Dwight Waller in 1943.

Dwight, along with brother-in-law Hoyle James, owned and operated Red and White Supermarket, which was located at Six Points on the Concord Highway in Albemarle.

Iris stayed at home and raised their four children, Mike, Candace, Gail and Crystal. The family was active at West Albemarle Baptist Church, where she served as church librarian, Sunday school teacher and choir member for many years.

She is an avid bird-watcher and loves to watch “Andy Griffith,” “Bonanza” and “Perry Mason” on television. She still subscribes to The Stanly News & Press so she can continue to keep up with people and events in Albemarle.

She says her faith and love for family and friends have been instrumental in giving her life meaning over the years.

Stanly County Schools will switch to full remote learning Wednesday after a decision made by the school board at Saturday’s... read more