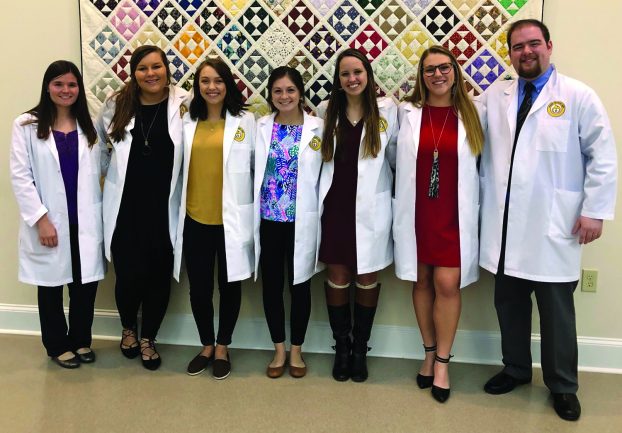 For the second time in two academic years, the graduates of Pfeiffer University’s nursing program passed the National Council Licensure Examination (NCLEX), the nationwide examination for the licensing of registered nurses, on their first try. And each
had job offers by graduation, according to information released by the university.

“These results are a credit to the hard work of our students — and to a dedicated faculty that supports them in ways that go far beyond quality classroom and lab instruction,” said Dr. Martha Bramlett, an associate professor who chairs the Department of Nursing at Pfeiffer.

Bramlett was particularly pleased with the NCLEX results. After graduating in May, Pfeiffer’s nursing students take the NCLEX exam in May, June or July. In 2019 and again in 2020, they achieved a 100 percent pass rate without having to take the test
more than once. This year, only two other BSN programs in North Carolina achieved the same result. All told, 30 programs in the state confer Bachelor of Science in nursing degrees.

“While a number of schools have initial pass rates in the high 90s, it is difficult to get a 100 percent pass rate,” Bramlett said. “Most schools have a small percentage of students who need to take the NCLEX exam more than once to pass.”

Pfeiffer officials attribute the success to hard work and determination, but also an emphasis on high standards.

The standards begin with requiring students to achieve at least a B average (83) for all tests they take during a semester. This ensures that they are prepared to pass NCLEX.

Until this year, the average had been 86, which was thought to be the highest cutoff score among nursing programs in the state. The change to 83 reflects the nursing department’s desire “to be consistent with the majority of the rest of the university,” which views 83 as a B, Bramlett said.

She stressed that nursing’s standards are not lower as a result.

“An 83 is still one of the highest cutoff scores in the state,” she said. “But more important than the grade is their mastery of the content. They must not only have a wealth of knowledge but must also be able to apply that knowledge to real situations.

“This includes using the knowledge they have and applying it to novel situations or conditions they have not previously seen. We realized that the difficulty of our questions was increasing to try to capture their ability to think critically. So, the number may be lower, but the questions are more difficult.”

Avery Wright, BSN, RN ’20, won the 2020 Dianne Yow Daniels Outstanding Senior Award for her leadership qualities and academic record. She now works in the emergency department of the High Point Medical Center. She knows how demanding and competitive the nursing program at Pfeiffer can be.

“It was extremely stressful,” Wright said. “I said no to a lot of opportunities to socialize because I needed that cutoff grade.”

Pfeiffer’s nursing students keep extracurricular activities to a
minimum (unlike nursing students in many other programs, though, Pfeiffer’s are permitted to play sports). At the same time, an extensive support system is in place to help them meet the program’s high expectations.

For starters, classes are small, which enables students to receive lots of 1-on-1 attention from their professors. And professors are always available to help students.

“In fact, anytime a student makes less than an 83 on an exam (or an 86 previously), we meet with them to look at how to help them improve,” Bramlett said. “We have study/review sessions with them, and we encourage all of the students to come to us with questions or concerns.”

The Department of Nursing also places a premium on teaching study skills. This becomes apparent in a boot camp for rising juniors, where they determine their learning styles and are taught effective ways to study, get organized and set priorities. Seniors
talk about study skills and athletes hold forth on the kind of discipline that’s needed to be successful. 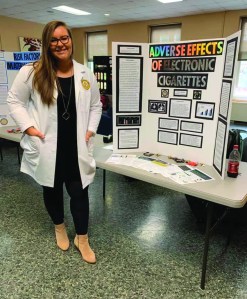 Avery Wright prepares a presentation on the harms of e-cigarettes.

After the boot camp, professors continue to work with students to help them find the best way to study, often enlisting the assistance of the Wick S. Sharp Learning Center.

Each junior is assigned to a senior mentor, who’s there to answer questions or give advice. Some seniors serve as tutors for juniors in individual subjects.

During the last semester of their senior year, students take a series of tests to determine their areas of strengths and weaknesses. The senior faculty then meets with each student to help them develop a plan of study to improve their weak areas as they approach the licensing exam after graduation.

Wright thrived in this culture. Encouraged by faculty, she bonded closely with her fellow students, with whom she often studied and/or turned to for help when she had difficulty understanding a procedure or concept during a lab.

She also said she had no problem getting extra help from professors when she needed it.

“They made their office hours around our schedule, which were between our classes or, even, early in the morning before classes began,” she said.

Professors were even available to tutor Wright after classes ended her senior year and she began preparing for the NCLEX exam.

After taking several practice tests, she found she was struggling with medical calculations. So, she called on Caitlin Lofton, an
assistant professor of nursing, for help. This was provided via an intensive review that took place over Zoom, and, looking back, Wright seems not at all surprised that Lofton provided it.

“The professors were always looking out for us,” she said.