Carol Mosley always tries to wear something pink each day in October. From scarves, blankets, face masks and jewelry to a wreath that hangs outside her door, she has collected tons of breast cancer awareness paraphernalia over the years.

As a 20-year breast cancer survivor, Mosley, 63, never misses a chance to celebrate her recovery and the fact that her cancer has yet to reappear. Each year the Badin resident participates in various breast cancer walks in Stanly County and Montgomery County, where she’s a teacher at Page Street Elementary, and is always open to speaking with and educating people about being proactive and getting routine mammograms.

In 2016, Mosley was interviewed by the Levine Cancer Institute in Charlotte about her battle with cancer and her testimonial was featured on the health monitoring screens at Atrium Health.

“Watching her face breast cancer head on and still be a positive inspiration to other women going through the same situation has been amazing,” her daughter Andrea Thomas said. 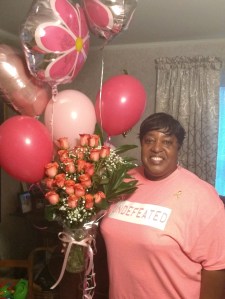 Carol Mosley, who lives in Badin, is a 20-year breast cancer survivor.

Mosley was first diagnosed in August 2000, after she discovered a lump in her left breast. Though her doctor assured her it was likely just fatty tissue and nothing to worry about, the results from a biopsy revealed the truth.

“In my head I had never thought of the word cancer,” said Mosley.

She knew of only one other family member that had breast cancer and that occurred about 20 years prior.

“It just didn’t register in my head.”

Trying to fight off tears during what Mosley called a surreal moment after learning she had cancer, she left the doctor and came home to tell her mother, who had Alzheimer’s disease. Mosley appreciated that her mother was cognizant enough to comfort her and to tell her it was going to be okay. She later reached out to the rest of her family to give them the news.

Once a second opinion confirmed her diagnosis, she underwent a single mastectomy followed by six rounds of chemotherapy. She often felt weak and nauseous after the chemo, which affected what she ate (she couldn’t eat hot foods) and caused her to sleep more than usual. Mosley said the chemo left “a tar, metallic taste in her mouth.”

But through all of the obstacles that come with battling cancer, Mosley had a robust support group that helped her along every step of the recovery process. Her family, including her eventual husband Thomas, were always by her side and her church, First Baptist Church in Badin, often provided food to both Mosley and her mother.

Her Christian faith provided a key source of comfort and strength for Mosley.

“I am a believer in Jesus Christ and I believe that he is able to heal and do more than anybody can do,” she said.

And having to overcome breast cancer, and the surgeries and treatments that come with it, has only deepened her faith.

She urges women in the community to be vigilant about their health, including receiving routine check-ups and being proactive if they sense something is not right.

Mosley has taught for roughly 20 years in Montgomery County Schools, mainly at Page Street Elementary, where she currently teaches exceptional children in grades 3-5.

During her teaching tenure, she has been named Teacher of the Year at the elementary school several times along with an Educator of Excellence.

While it’s been difficult to not see her students in class — schools in Montgomery are all operating remotely due to the county’s struggles with the coronavirus, she has enjoyed being able to interact with her kids online. She said she has a daily participation rate of around 90 percent.

She enjoys working her with students to discover their preferred learning styles and what makes them unique.

“You have to be willing to go a little bit above and beyond to find out their way of learning, their way of thinking,” she said.

Mosley is also active at First Baptist, where she teaches Sunday school classes, is a member of the spiritual choir and is the church’s treasurer.