PEEKING INTO THE PAST – Colson’s Mill Marker in Norwood 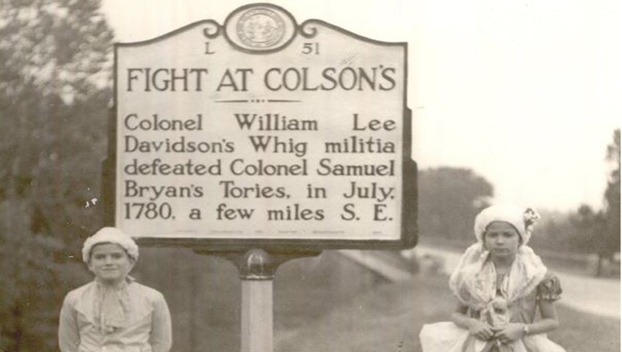 Today’s photo shows Douglas Eury and Judy Starnes just after they pulled the cords to unveil the new marker.

The marker, located on the east side of Highway 52 just north of the bridge across the Rocky River, commemorates the “Fight at Colson’s” from the Revolutionary War.

The Battle of Colson’s Mill took place on July 21, 1780. A Patriot militia led by William Lee Davidson routed a group of Tories who had gathered near the junction of the Rocky and Pee Dee rivers.

The “Fight at Colson’s” marker was dedicated on Oct. 10, 1952. According to several Stanly News & Press articles from early October 1952, members of the newly-formed Stanly County Historical Society, along with the Yadkin River Patriots Chapter of the Daughters of the American Revolution, played a role in the event.

Today’s photo shows Douglas Eury and Judy Starnes just after they pulled the cords to unveil the new marker.