Business leaders speak about how pandemic has affected county 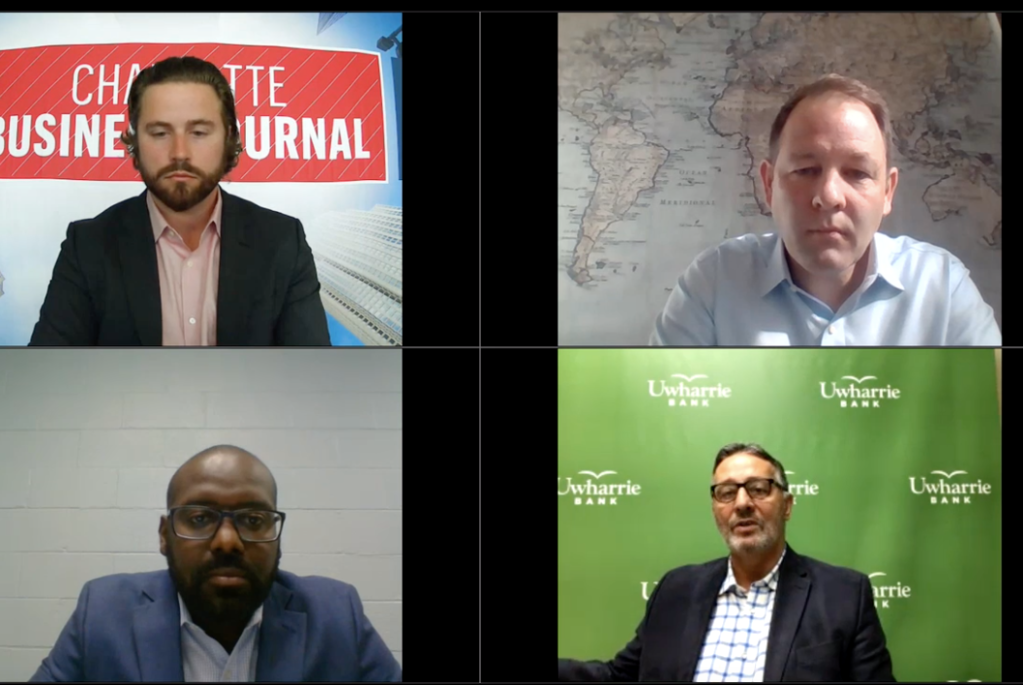 During an online forum Wednesday morning, there was broad agreement from business leaders in Stanly County that while the coronavirus pandemic has been difficult to navigate and has presented many challenges, it has also brought about some much-needed changes and benefits that will make each business stronger in the future.

Roger Dick, CEO of Uwharrie Bank, explained that while the regional bank has bolstered its online services due to the pandemic, with many employees now working remotely from home, it’s also worked to restructure the idea of what community means.

“As a regional bank, we talk internally about our definition of community has moved away from geography to being about people that share your values in a virtual space,” he said, noting that the increased use of different online platforms has helped the bank become more relevant to the community.

Alluding to British prime minister Winston Churchill, Dick said the pandemic in many respects has been “a blessed crisis” for the bank. It has already processed more than 1,000 PPP loans for small businesses and has helped distribute stimulus checks to more than 11,000 families.

“We are trying to keep gas in the tanks of these businesses in the form of working capital so they can keep people employed,” he said.

Aside from Dick, the other panelists — Scott Bullard, president of Pfeiffer University, and Chris Jack, plant manufacturing manager at Fiberon — agreed that the pandemic has presented them with opportunities to grow their organizations in ways that would likely not have been possible before this year.

Jack mentioned that due to people working from home, many have decided to remodel their decks and outdoor spaces, which has resulted in increased business for Fiberon. As a result, while many companies have had to lay people off due to the pandemic, the opposite has occurred with Fiberon. The company has hired more than 50 employees in the community to fill open positions and it has added another 20 jobs ranging from maintenance and electrician to supervision entry-level positions.

“We’ve been doing a good job of going out into the community and looking for those diamonds in the rough and giving them the training that we need to fill in those positions,” Jack said.

He added that the company has recently also added two new production lines.

The company is looking to partner with local schools, including Pfeiffer and Stanly Community College, to identify prospective candidates to fill job openings.

Fiberon has also shifted to conducting more online meetings via Zoom or Webex, which Jack sees as the new normal even after the pandemic ends. Instead of employees traveling to meet with officials from other branches of the company, online meetings can occur which would be safer and more efficient, he said.

Pfeiffer has also seen major growth this year with the opening of its new 41,000-square-foot Health Sciences Center in downtown Albemarle in September. Bullard said that while there are currently 50 graduate students enrolled in the occupational therapy and physician’s assistant programs along with 11 employees, by next year there should be roughly 275 graduate students and 30 employees.

“We look forward to collecting new and talented North Carolinians … but it’s also nice to help other people practice rural medicine in other parts of the world,” Bullard said.

He said the facility will help to improve health outcomes for people not just in Stanly, but for people in neighboring rural counties such as Montgomery and Anson.

The university has made the transition to remote learning — 51 percent of all courses are exclusively online while 24 percent are a mix of online and in-person — and is adjusting to the new way of virtual life for colleges around the country. The embrace of online platforms and technology “has pushed us forward five to 10 years in just a matter of months,” Bullard said.

Each of the panelists acknowledged that the biggest challenge during the pandemic has been making sure that their employees and students remain safe and healthy. They have all taken steps to make sure their businesses are as safe as possible and following proper health guidelines.

On Pfeiffer’s Misenheimer campus, Bullard mentioned that there has been a special emphasis on having students congregate outside, where the coronavirus is less likely to spread. Dining tables, for instance, have been placed outside on the quad so students can have a place to eat, talk with each other and enjoy the fall weather.

The speakers also emphasized paying attention to their employees’ needs and listening to them while also giving them accurate information about how each organization is reacting to the coronavirus.

“I think your most talented people are going to remember two and three years from now how you treated them during this time,” Bullard said.

While working remotely has its benefits, the panelists spoke about the importance of in-person interactions. Dick said that in the future, Uwharrie Bank “will be pushing to remain high-touch as well as high-tech.”

Dick thinks the pandemic will create what he called a “rural revival,” where people who used to live in bigger cities might relocate to less populous areas like Stanly County.

“I think that COVID is going to allow a lot of people to have more options about where they work and how they do that,” he said.

With the opening of Pfeiffer’s new health sciences facility, along with new businesses relocating to Stanly — such as Charlotte Pipe and Foundry moving to Oakboro — and existing businesses, like Fiberon, expanding, “that sounds to me like a rising tide and that’s going to benefit everyone,” Dick said.