As someone who grew up loving politics in an active, politically-involved family, Tarsha Ellis is now running to become a politician herself.

Ellis, a Democrat, is challenging Republican incumbent Sen. Carl Ford to represent a district that covers Stanly and Rowan counties in the N.C. Senate. 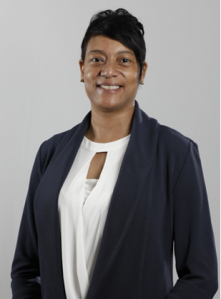 Tarsha Ellis is running for political office for the first time as she challenges incumbent Carl Ford for N.C. Senate.

Born and raised in East Spencer, Ellis attended North Rowan High before graduating from the North Carolina School of Science and Mathematics in Durham. She received her bachelor’s degree from the UNC-Chapel Hill.

Ellis, 47, is a single mother of two, with one of her children in high school and the other in college.

Ellis has more than 20 years experience in retail working for Ahold Delhaize, which owns Food Lion. She said working in “corporate America” has trained her to find a solution to any problem that might come her way.

Though she has never held elected office before, she said it was always a goal of hers to run for office. She was encouraged to run from local Democrats in the county and she actually beat out fellow Democrat and Rowan party chairman Geoffrey Hoy in the March primary.

“If you don’t stretch yourself, you don’t grow,” she says about seeking office for the first time.

According to her website, Ellis is dedicating her political run to her late mother Willie Mae Ellis, who loved politics and even registered people to vote at the family’s kitchen table.

Issues that matter to Ellis include fully funding education, including paying teachers at a level which properly values their talents and commitment to helping children.

“Having educated citizens is important and provides strength in our communities,” she said.

Other important issues for Ellis include working to end food insecurity, working to provide affordable and accessible health care and expanding Medicaid in the state.

Though the coronavirus pandemic has complicated her campaign and has limited traditional face-to-face interactions with the public, she has conducted Zoom meetings with people in Stanly, including members of the county’s Democratic Party, and has networked with other candidates running for office across the state. Ellis has also conducted canned food drives in Albemarle and Oakboro with the proceeds going to the Stanly Community Christian Ministry.

In meeting with people in Stanly, she said one of the key issues for many of them is the environment, specifically protecting the county’s natural resources. She also is committed to supporting legislation that curbs the effect of climate change, and working to ensure quality  air, water and land for current and future generations.

Ellis also wants to work to help stimulate meaningful job creation for the people of Stanly and Rowan.

Compared to Ford, Ellis said she wants to be a more visible member in the community.

“I want to be able to make sure if people do call or reach out to me and write letters, I want to be responsive,” she said. “It’s important that we hear from our constituents, whether you agree with them or not.”