For the last several weeks, Stanly County’s coronavirus positivity rate has been one of the highest in the area. At the beginning of the month, the county’s rate hovered around 10 percent while as of Friday, though it improved, the rate was still around 7.2 percent, according to data from the state’s Department of Health and Human Services, which reports daily positivity rates for each county. Stanly’s rate has also consistently been higher than the state average.

Over the weekend though, progress appears to have been made in limiting the spread of the virus. As of Monday afternoon, the county’s positivity rate had fallen to 5.0 percent — better than the state’s overall average of 6.6 percent. It’s also slightly better than many of its neighboring counties, including Cabarrus (6.0 percent), Union (5.7 percent) and Rowan (5.7 percent), which previously had fared much better than Stanly, and significantly better than Montgomery (13.9 percent) and Richmond (10 percent). 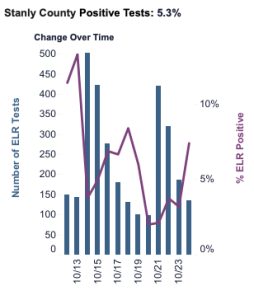 Stanly’s coronavirus positivity rate, which had been as high as 10 percent earlier in the month, has now fallen to around 5 percent, according to state data.

The percent positive, which is the percentage of all coronavirus tests performed that are actually positive, is a key measure for any community, according to the Johns Hopkins Bloomberg School of Public Health, because it gives an indication about how widespread the infection is in a given area. Johns Hopkins notes that the percent positive in a community is considered “too high” if it’s more than 5 percent.

According to Johns Hopkins, a higher percent positive in an area suggests higher transmission and that there are likely more people with coronavirus in the community who haven’t been tested yet. A lower percent positive, meanwhile, simply means that the level of coronavirus transmission, relative to the amount of testing, is low at a specific point in time. The rate will continue to change with more testing.

Stanly County Health Director David Jenkins said that while he was “appreciative” of the fact that percent positive for COVID-19 tests in the county has decreased over the past week, he couldn’t give a precise reason for why it was so.

“There are too many variables that can influence this number being lower to provide a specific reason,” Jenkins said.

The county’s highest weekly percent positive occurred during week 17 of the pandemic, when the positivity rate was around 13 percent, according to data from the county health department.

Stanly County has tested almost 17,000 people and has more than 2,450 cumulative coronavirus cases, per data from the county health department. A total of 70 people have died and 18 people are currently hospitalized.

Statewide, there have been roughly 3.8 million tests conducted resulting in 261,742 cases. Hospitalizations have gradually been increasing recently with 1,193 people currently hospitalized, while 4,170 people have died.