The Albemarle Finance Department has received the Certificate of Achievement for Excellence in Financial Reporting Award from the Government Finance Officers Association of the United States and Canada. The department received the award for the fiscal year ending June 30, 2019.

Finance Director Colleen Conroy announced the award before the city council recently. This is the third consecutive year the city’s finance department has earned this recognition.

“We are thrilled once again to receive this award for the third year and hope that it just continues on and on,” Conroy said. “We’re not a large group, but we get-er-done.”

While the GFOA’s website hasn’t yet listed the current winners, local 2018 winners, aside from Albemarle, included Stanly County and the Stanly County Board of Education. 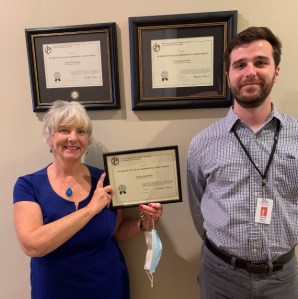 According to the GFOA, “the Certificate of Achievement is the highest form of recognition in governmental accounting and financial reporting, and its attainment represents a significant accomplishment by a government and its management.”

The goal of the program, according to the website, “is not to assess the financial health of participating governments, but rather to ensure that users of their financial statements have the information they need to do so themselves.”

The GFOA is a major professional association servicing the needs of more than 20,000 appointed and elected local, state and provincial-level government officials and other finance practitioners.

It provides publications, training programs, services and products designed to enhance the skills and performance of those responsible for government finance policy and management.

The association is headquartered in Chicago, with offices in Washington, D.C.