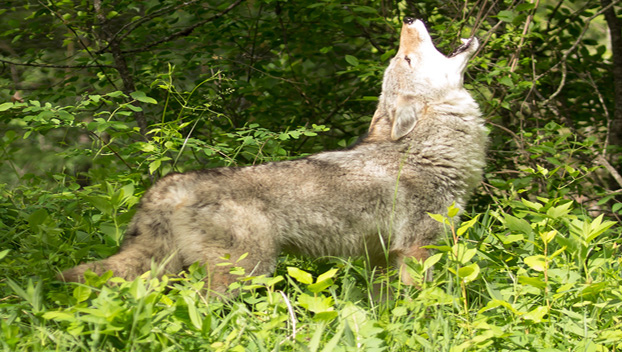 Expect to see or hear more coyotes in the coming weeks as young coyotes — those born this past spring — begin leaving their parents’ territory to find and establish a territory of their own.

Biologists with the N.C. Wildlife Resources Commission say there’s an annual peak of reported sightings in October and November, typically from people who are concerned about the dangers resident coyotes could pose; but these secretive canines are not generally a threat to humans and the chances are good that they have been in the area for some time.

Once they’re old enough to survive on their own, young coyotes may wander long distances — upward of 300 miles — before settling down somewhere that’s not already occupied by an established coyote pair. At first, littermates often travel together before splitting off in search of an unrelated mate. During this time, these young coyotes will yip, howl and bark to keep track of each other as well as other coyotes whose territories they are passing through. Because of the hollow tone of their howl and a tendency to vocalize rapidly in a constant stream of sounds, two coyotes can sound like a huge group and may sound closer than they actually are.

“Coyotes are now common across North Carolina, and merely hearing or seeing one is no cause for surprise or alarm,” said Falyn Owens, the agency’s extension biologist. “Coyotes rarely attack humans, and while they are curious about us, they are also wary and will usually try to avoid people as much as possible.

“However, if they regularly find food near where people live and experience few consequences for hanging around, coyotes can lose their natural fear of people over time.”

• Always supervise small pets when they’re outside, and especially around dawn and dusk;

• Keep cats indoors and poultry in a predator-proof run;

• Feed pets indoors or remove all food when a pet is finished eating outside;

• Keep birdseed off the ground around feeders, or attract birds with seed-bearing wildflowers in lieu of feeders;

• If you see a coyote around your home and feel safe to do so, scare it off.

Because coyotes are opportunistic predators of small animals, cats and small dogs are at risk if left to roam outside without close supervision. Keep these animals in catios (cat patios), on leashes, or inside a dog-proof fence (at least 6 feet tall and secured underneath to prevent digging under). Chickens and other poultry should be kept in a secure, predator-proof run.

By eliminating easy food sources around homes, coyotes are more likely to stay wary of people and pass through our spaces only when necessary. Active deterrence can encourage them to avoid us even more.

“Hazing, or standing your ground and scaring the animal off, can be a good strategy to help these wild animals maintain a healthy fear of humans,” Owens said. “Intimidate a coyote by throwing small objects toward it, making loud noises, or spraying it with a water hose. Keep it up until the coyote leaves. The point is to convince them that you are a threat, so they know to stay away.”

While native to the mid-western section of North America, coyotes have expanded their range into the eastern United States and are now established in all 100 counties of North Carolina. According to data collected through the agency’s Wildlife Helpline, the most common complaints against coyotes include the following:

• Their presence in the general area;
• Fear of danger to people, pets, and livestock, (but no aggression or damage reported);
• Seeing a coyote out during the day (this does not indicate disease);
• Loss or injury of outdoor or feral cats;
• Noise.

Coyotes can be hunted year-round and can be trapped during the statewide regulated trapping season (Nov. 1 through end of February). For more information about coyotes in North Carolina, visit the Wildlife Commission’s coyote page on its website (ncwildlife.org/coyote), or call the Commission’s N.C. Wildlife Helpline toll-free at 866-318-2401. The call center is open Monday through Friday (excluding holidays) from 8 a.m. to 5 p.m.