Biden signs have been snatched, vandalized throughout county 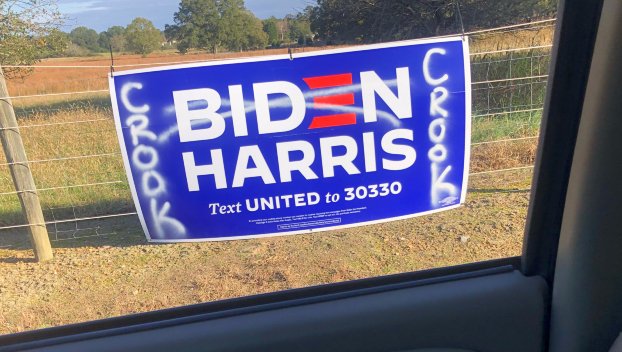 As Election Day looms, and with many people anxious about the outcome of the presidential race, there have been numerous incidents in Stanly County of Joe Biden signs being vandalized and stolen.

Kevin Taylor, chairman of the Stanly County Democratic Party, has personally heard of at least eight people who have reported their signs being taken.

Under North Carolina law, it’s a class 3 misdemeanor “for a person to steal, deface, vandalize or unlawfully remove a political sign that is lawfully placed…”

“It’s cowardly and sad” that the signs have been tampered with, Taylor said, “but in some ways not surprising given the rhetoric of our president, who actively encourages this kind of disrespect.”

Ryan Lowder, who lives in the Millingport area, said his family has had roughly six signs either stolen or defaced. One large blue “Biden-Harris” sign on his family’s farm was spray-painted with phallic symbols, he said.

Growing up as a Democrat in a majority-Republican county, he’s not surprised by the acts, which he presumes were orchestrated by young kids. His family had several Obama signs stolen in the past.

He’s also not surprised given the current political climate, with both President Trump and his challenger, former vice president Biden, generating so much intense criticism from broad swaths of the electorate.

“This election is extremely heated and a lot of people have strong beliefs in both directions,” he said, adding that the political races “tend to want to pull the country apart sometimes.”

Russ and Susan Sharples purchased a Biden sign about a month ago and placed it in their yard. He said that late last week the sign was gone. There are many Trump signs in his neighborhood, which he says have not been messed with.

“Honestly I’m surprised it lasted as long as it did,” Russ said about the sign.

Sheriff Jeff Crisco said he has not personally been made aware of any acts of political vandalism. Kimberly Blackwelder, director of elections for the county, also said she was not aware of any official complaints.

Mark Lowder, chairman of the Stanly County Republican Party, said he knows of only a few incidents where Trump signs had been snatched, adding that he personally put up three new Trump signs in places where they were originally stolen. He was not aware of Trump or any other Republican signs that were defaced.

Austin Coats, who lives in Norwood, has had at least eight signs removed or vandalized. On one now-defaced sign, the word “Biden” was crossed out and the word “crook” was spray-painted twice. While he knows of other Biden signs in the county getting taken or messed with, he’s not aware of signs for other Democrats, like Gov. Roy Cooper, getting the same treatment.

He estimates for the 10-20 signs for Democratic candidates that are in Norwood, there are hundreds of signs for Republican candidates. He is not aware of any Trump signs that have been vandalized.

“I would never tear down the sign of an opponent,” Coats said.

Coats is not sure why people have resorted to tampering with the Biden signs, especially since Stanly will almost assuredly vote overwhelmingly for Trump (in 2016, he received 73 percent of the vote).

“I don’t understand what people are afraid…” he said.

Though the signs have been stolen, the silver lining is that there has been a huge increase in demand for Democratic signs this election season compared to past years. Many people who have lost signs have visited the county’s Democratic headquarters to pick up new ones.

“We have had to make several trips to a Democratic depot in Charlotte to restock” on signs, Taylor said. “This is an election like no other. People who have never put up a sign are putting them up now.”

“Democrats are reacting to the Trump signs and flags and making their voices heard,” Taylor added.