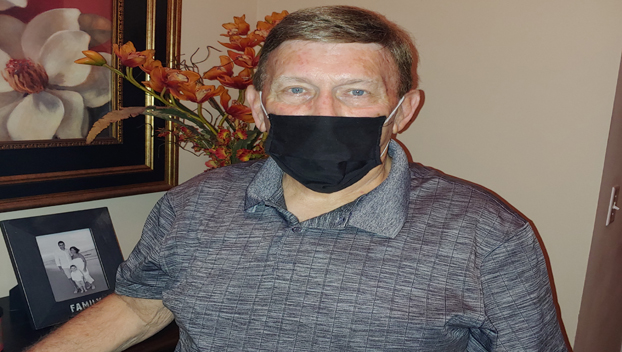 In the middle of June — around the time 71-year-old Zeb Starnes and his wife attended a funeral as COVID-19 was raging — 27 states reported a seven-day case average higher than the week before. At that time, more than 114,000 people in the United States had died of the virus, and nearly 2.1 million positive cases had been reported.

But those grim statistics and others like them were not enough to persuade Zeb. Neither did it persuade his wife, Shirley, to stay home, but who did choose to wear a mask during the funeral. Zeb was among a number of mourners who didn’t wear a mask and didn’t practice social distancing during the funeral. He also was among the 20-25 attendees inside the church who later were diagnosed with COVID-19.

“I really wasn’t taking precautions like I should have been,” he says. “After we lost six very close friends who attended the funeral to COVID, my whole perspective changed about the seriousness of the virus.”

The Starneses knew the deceased attendees for well over 40 years. There was a husband and wife, two sisters and two other gentlemen.

At least he woke up enough to realize that COVID-19 is not to be taken lightly.

Within a couple of weeks of the funeral, Zeb lost his appetite and began to feel weak. He had a sore throat and no energy. Zeb called his primary care doctor, Victor Ha, MD at Atrium Health Cabarrus Family Medicine – Harrisburg, who scheduled an appointment at Atrium Health Harrisburg Emergency Department

“I went and the staff took good care of me,” Zeb says. “They did several tests, including the COVID-19 test, and it came back positive. At that point I was very nervous and scared, due to me only having one kidney. Plus, I had two heart stents inserted in August 2019.”

He had reason to be anxious. In mid-June, the Centers for Disease Control and Prevention published a report that stated people with chronic health conditions such as heart disease and uncontrolled diabetes were being hospitalized six times more often than otherwise healthy individuals infected with COVID-19, and they died 12 times more often.

Instead of being transferred to another facility, Zeb was sent home and connected with Atrium Health’s COVID-19 Virtual Hospital team.

“This group was absolutely amazing,” he says. “For 14 days, we were visited by a paramedic and had a virtual doctor’s visit.”

One doctor initially thought Zeb might need to be admitted to the hospital, but he recovered well enough at home.

“I’m very thankful for a lot of praying friends and my faith in God,” he says. “The whole COVID-19 team and Atrium Health’s COVID-19 Virtual Hospital were God-sent. As of today, I feel fine, except I still have a small cough and I’m still using oxygen to sleep at night. But considering all that we went through, I am truly blessed.”

Zeb says the ordeal taught him a valuable lesson that he wants to share with as many people as possible.

“I truly value my health and now I don’t go anywhere without a mask,” he says. “Wearing a mask while shopping or just when you’re out and about will not kill you. But not wearing one just might end your life here on earth.”