Professor, Stanly native calls for people to come together, listen to each other 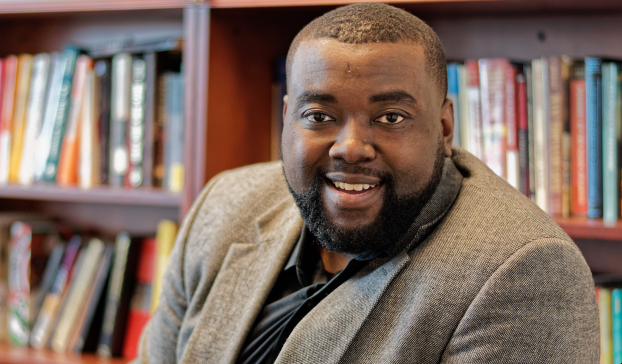 Charles Chavis, who graduated from West Stanly High, is a professor at George Mason University. Photo courtesy of Charles Chavis.

As a young Black child growing up in Stanfield, Charles Chavis was always aware of his blackness. The town had relatively few Black residents, especially compared to more diverse municipalities in the county like Albemarle.

As a student at West Stanly High School, which he noted wasn’t too racially diverse, many of his friends were white, as were many of his teachers.

While these people were very supportive of Chavis, “I was very cognizant of the ways in which my experience was different than that of my fellow Black students elsewhere in the county,” he said.

Similar to so many Black Americans across the country, Chavis has also experienced uncomfortable interactions with the police growing up in the county. Police conduct has drawn national attention and criticism this year with the killings of George Floyd and Breonna Taylor at the hands of officers in Minneapolis and Louisville.

One of the turning points in his young life came in high school when a social studies teacher told his class that hatred and racism would consume people if they allowed it.

“For me, that was something that stuck with me,” he said about his teachers’ words, adding that it was a reminder that racism must always be confronted, not just by people of color but by everyone.

“If people are willing to come to the table and deal with and have a larger conversation about the legacy of systemic racism in this country then I will gladly have that conversation,” he said.

He added: “A lot of what I’ve done in my career and in my scholarly journey has been centered around really capitalizing off the understanding of what that moment meant to me.”

Those words, and Chavis’ broader upbringing in Stanly, have remained with him as he has progressed throughout his educational career: he has a BA in African American Studies (UNC-Greensboro), a Masters Degree in Theological Studies (Vanderbilt University), and a Ph.D. in History (Morgan State University) and is now an assistant professor at the Jimmy and Rosalynn Carter School for Peace and Conflict Resolution at George Mason University. He is married and resides in Fairfax, Virginia.

According to his website, he’s a historian and museum educator “whose work focuses on the history of racial violence and civil rights activism and Black and Jewish relations in the American South.” His research interests include history of racism and anti-racist activism, and his areas of specialization include African American history (especially from Civil War during 1860s to the Civil Rights Era of the 1960s) and the legacy of racial violence in the country.

Chavis is the author of the upcoming book, “‘Maryland, My Maryland’: The Lynching of Matthew Williams and the Politics of Racism in the Free State” (Johns Hopkins University Press, 2021) and co-editor of For the Sake of Peace: Africana Perspectives on Racism, Justice, and Peace in America(Rowman & Littlefield, 2019).

Chavis, 30, is also the director of the John Mitchell, Jr. Program for History, Justice, and Race at the university and was recently appointed by Maryland Gov. Larry Hogan to serve as vice chairman of the Maryland Lynching Truth and Reconciliation Commission.

Maryland Attorney General Brian Frosh announced in late October that the commission has received a $300,000 Department of Justice grant to research and address the legacy of unsolved lynchings that occurred in the state.

“This grant is not only historic, but it is also transformational and speaks to the current moment that we find ourselves in as a nation, a time when the historical trauma that has plagued Black people in the United States for over 400 years has visually been exposed to the nation and the world in the midst of a global pandemic,” said Chavis in a press release.  “The Commission will pursue and honor the victims of these human and civil rights murders, because we believe that the descendants and relatives are owed this truth.”

Even though he’s achieved academic and professional success, he has never forgotten where he came from.

He added that one reason he is comfortable having conversations about race with white people is due to his experience navigating life in a county that is overwhelmingly white. And he believes talking with people of different backgrounds is critically important, especially today, when so much of the country is divided.

Chavis says it’s crucial for people to listen to one another and to understand another person’s point of view, even if it’s uncomfortable.

“You have to be willing to really sit down and listen to your fellow man and understand each other’s shared humanity,” Chavis said. “And it’s easier to talk about that when we’re not tied into these polarizing debates where everyone has to choose a side.”

He added: “You have to be able to listen to your fellow man and hear them and hear their suffering and their trauma.”

Over the past several months, Stanly County has worked to create events where people of different backgrounds could come together to express their thoughts and views. From peaceful protests against police brutality and systemic racism after Floyd’s death to an open forum for police and citizens to discuss race relations to the creation of the Susu Community Project, which has hosted a number of clean-up efforts in the county, the county has worked to build bridges between different communities.

Chavis acknowledged that while the country is currently dealing with two pandemics, “I think what’s unique about this specific phase of the larger freedom struggle is that we have a massive interracial movement and a coalition that is emerging.”

“We have to wrestle and deal with why systemic inequality continues to persist and the numbers disproportionately show that African Americans and people of color are being impacted in greater and higher levels,” he said.

Chavis mentioned that class divisions also play a role. He noted that poverty and a lack of resources can affect all people regardless of race and is currently playing out with many communities, including Stanly, operating under some form of remote learning.

“To really have a virtual education in many ways is something that is a privilege,” he said.

Chavis said the confluence of recent events — the recent spate of racial injustices over the past few months combined with a virus that continues to ravage communities — has created a mood in the country that demands peace “and peace can only be obtained through justice.”

But he is confident that peace will eventually come — though people will have to work with each other and listen to each other to obtain it. One development was the release in August of Ronnie Long, a Black man who had served 44 years in state prison for the purported rape of a white woman in 1976, though forensic evidence pointed to his innocence. He had served several years at Albemarle Correctional Institution before a court ruled to vacate his rape conviction.

“I believe there is hope, but we have to be willing to do the work to get through this,” Chavis said. “Because on the other side of this reckoning I believe is a reconciliation and a healing that has to take place now in this country.”