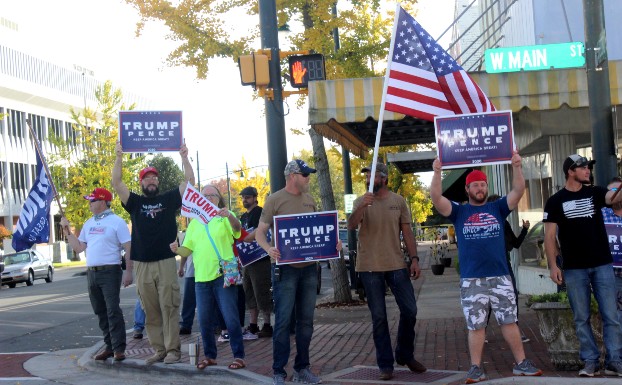 Stanly County voters for President Trump wanting their voices to be heard staged a rally to show support Sunday afternoon in downtown Albemarle.

Voters took to the streets waving Trump signs and American flags to people passing by in their vehicles.

An estimated 50 to 60 people gathered at the corner of Second and Main streets to show their support for Trump.

“Everybody knows this election is a fraud and we’re not going to stand for this anymore,” he said.

The rally brought supporters from outside the county, including Lisa Jillani of People Advocating Vaccine Education (PAVE). Jillani was circulating a petition to send to Gov. Roy Cooper for those against mandatory COVID-19 vaccination.

Shannon Cline, a Stanfield resident, said she hoped people who saw the rally “will understand that they can’t just sit at home and wait. They need to be out and to be active and they need to be supporting their president in person so everyone all over the country knows there are people who support him.”

Cline said she wanted U.S Sens. Thom Tillis and Richard Burr to come out in public and “vocally support our president that they can thank for keeping their positions in this state because of what Trump did.”

Many at the rally stated their desire to organize more rallies.