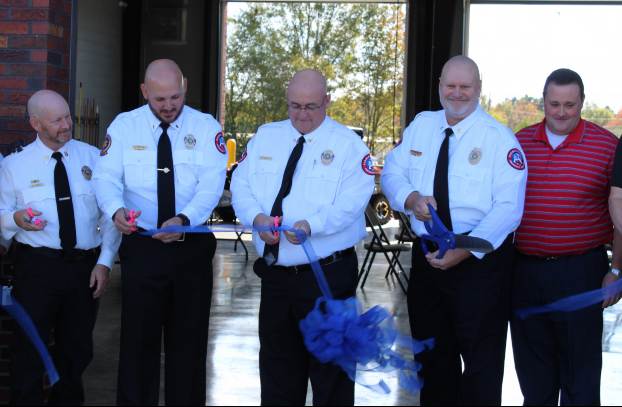 Many members of the community came out Friday afternoon for the ribbon cutting of the new Stanly County Emergency Medical Services Base 1, located at 1930 Hilco St., Albemarle.

The 10,000-square-foot station will serve as the main headquarters for EMS and will also be used primarily for as a training site. This is the department’s fourth EMS station, along with locations in Norwood, Red Cross and New London.

Establishing a new base in the area was first discussed roughly 20 years and though the property was initially bought in 2008 it never came to fruition until a few years ago, when County Manager Andy Lucas green-lit the project, said Stanly County Emergency Management Director Brian Simpson. The department first moved into the building Oct. 15.

“We waited on this a long time,” Simpson told the crowd, which included EMS paramedics along with Lucas and Commissioners Lane Furr and Mike Barbee.

At least five people will be stationed at the base at all times while numerous others, including training staff and community paramedics, will be constantly coming and going, Simpson said.

EMS Manager Mike Smith said the department owed it to the paramedics, who are essential to the health and safety of the people in the county, “to provide better facilities, equipment and trainings so they can work a little bit more efficiently…to cover our communities.”

Lucas said having a new facility will make the department more efficient and will help reduce response times in the city. The previous primary station, a rented facility on Bethany Road, had numerous operational issues, such as roof leaks.

“There are lots of local vendors who were involved in this project and the money puts that work back into our economy, which is really just fantastic,” Lucas said.

“Obviously this is a brand new facility and it buys us at least 40 years of good space and so we’re really proud that the commissioners were able to make this investment,” Lucas said. “We think it certainly will help in terms of our ability to deliver EMS services to the public…This is just a great day and a win-win for everybody.”