PEEKING INTO THE PAST – Veterans Day Edition Part 2 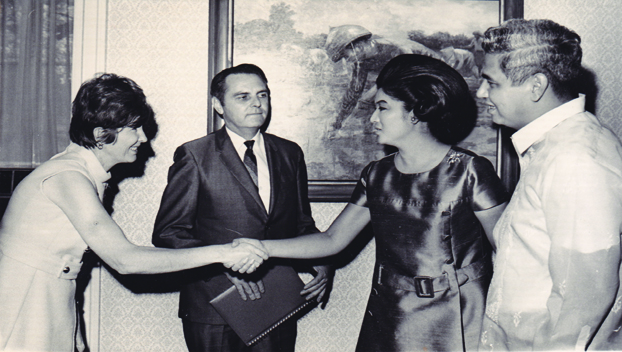 On Oct. 20, 1944, Gen. Douglas MacArthur made his return to the Philippines to fulfill his promise to retake the country from the Japanese.

According to the American Legion magazine from January 1945, PFC Silas Thomas, from western Stanly County, was in the first landing craft in the first wave to hit the beach during the invasion to retake the country. The men in this craft were determined to raise the American and Filipino flags.

Unfortunately, a photo of this event does not exist. Even though the famous photo of MacArthur wading through the surf to reach the beach is seen as marking his return it was really a publicity stunt. The raising of the flags by Thomas and his fellow soldier was the true symbol of America’s return to liberate the Philippines.

In 1969, the Philippines marked the 25th anniversary of the liberation from the Japanese occupation. Thomas and his wife were tracked down and invited by the Philippine government to attend the ceremonies.

According to Thomas’ daughter, her parents were delayed due to confusion about tickets with the airlines and missed the ceremony. They still made the trip and were given first class treatment by the Filipino government.

The photo with this article shows when the Thomas’ met with the provincial governor and Filipino First Lady Imelda Marcos.

You may recall many years later that Ms. Marcos made international news, in part, due to her collection of several thousand pairs of shoes. — Lewis Bramlett